Reveal of Our Next Update: Menander 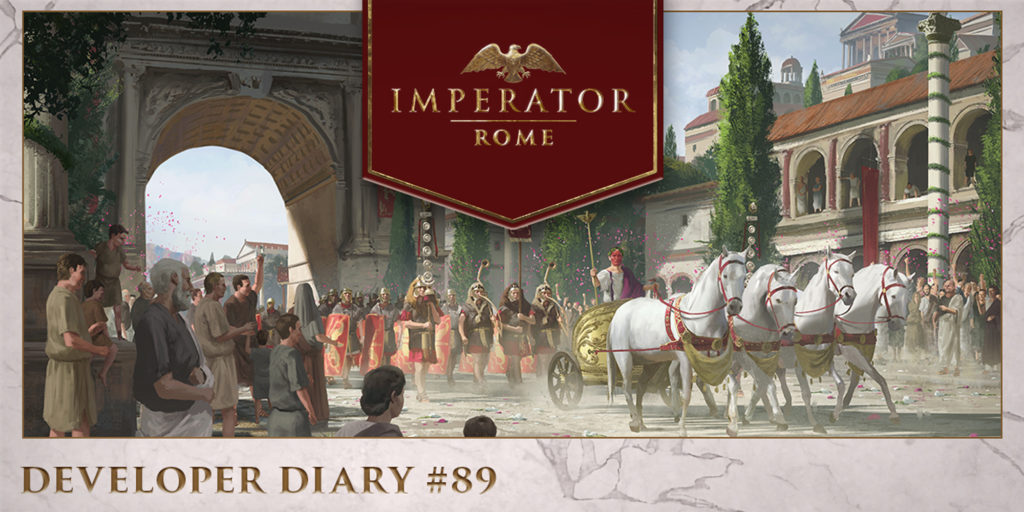 Today’s dev diary will give you the broad strokes on what you might expect from the Menander update.

As you may know, the Menander update makes up the ‘culture’ portion of the season of religion and culture. The portrayal of these two things were not chosen as my focus for the season lightly; I feel that they are key to unlocking some of the potential of I:R as an experience.

Something many of you have mentioned and that we have long wished to change, is the way that cultures are dealt with on an internal level. Rather than relying solely on cultural assimilation, the Menander update will bring you:

This feature will overhaul the way that you interact with the pops within your empire. Every culture represented within your borders will be shown in a cultural overview, and will possess several values unique to pops of that culture.

You’ll be able to limit the maximum poptype of a culture, preventing them from attaining citizenship, for example. This will of course affect the base cultural happiness of pops belonging to this culture, increasing their likelihood of rising up in revolt. Legislating for the granting of citizenship to an entire culture will take time, of course, during which all manner of upset may be encountered. Of most importance, cultures will begin to act as the ‘voice’ for your pops.

Citizenship is not all fun and games, though. Pops with citizenship rights will count as primary culture for all mechanical purposes, yet the number of cultures with citizenship status within your empire will affect the overall happiness of all integrated cultures. Just as Caesar went too far in bringing gauls into the senate, so too may you.

Of course, the struggle for citizenship that so often caused instability in Rome could not be faithfully represented without:

The need for cultural diversity also brought up the need for reworking rebellions. Rebellions have never quite satisfied me as a player – they rarely occur due to high thresholds, and were almost solely related to conquest, rather than domestic dissatisfaction.

It was our aim when we produced this to prevent ‘whackamole’ rebels similar to some of our older titles. In retrospect, I believe we went too far. History is filled with doomed provincial rebellions, and we aim to strike a balance between cause, effect, and frequency of revolts under the new system.

Rebellions will no longer have a national threshold in order to begin. Instead, the provincial loyalty bar will be responsible for dictating whether a rebellion spawns. Combined with cultural happiness, this should result in much more focused revolts, that occur as a direct result of your action or inaction.

Rebellions will be able to ‘snowball’, with other provinces joining in if province loyalty reaches a similar level.

We’ve a few additional parts coming here, which I’ll leave until a future week to discuss in detail.

We’ve decided to take the time to reimagine the faction and senate system that our titular nation (and many others) experience in republican playthroughs.

Firstly, I’d like to talk about something we’re removing, though. Senate ‘impact’ (otherwise known as the small hand that tells you if you can or cannot perform an action in republics, has been a thorn in our side for some time. The individual weighting on a per-issue basis for each political faction has proven to be exceptionally unwieldy, and makes it hard to get an overview of where your parties stand. (shown below)

Instead, we’ll be replacing this with an overall faction approval rating, which will not be weighted on a per-issue basis, and which acts more as a vote of confidence in your rulership as a whole. From a design perspective, this gives us a lot more creative control when using events and systems; and should mean that factions can play a much more integral part in your gameplay experience, rather than having seemingly arbitrary opinions on certain things. As a related note, it will be much more feasible to add unique factions to nations, government types, and even special interest groups that might appear or disappear at certain times.

Your actions will have direct consequences to your approval rating with various factions – sacking the holy site of Mars might cause outrage amongst the traditionalist optimates.

We’ll also be reducing the number of parties somewhat, for most countries. The 5 current factions aren’t very representative of ancient roman politics, and we feel that representing three main power blocs makes for a political landscape ripe for treachery and intrigue.

Additionally, we’ll be making some changes to how votes are calculated. Senate votes will be tied to characters (no, not one vote per character!), to represent the political clout of individuals. It should be possible therefore, for a particularly unruly senator to hold up bills entirely of their own volition.

We’ll also be taking a look at adding senatorial objectives: faction generated demands that give factions both a sense of identity and a method of interacting with your gameplay directly. More on those in a future diary!

Subjects will be receiving an overhaul in Menander, with the aim of making them more manageable, more potentially rewarding, yet less immediately powerful.

Subject relationships will now have a linear subject-type track from tributary to feudatory/integration. Every subject relationship will have a trust value which will grow at a rate influenced by opinion, inventions, and obligations. Trust itself can be spent to enact obligations, change tithes, perform actions, or upgrade subject type to a higher level on the track. 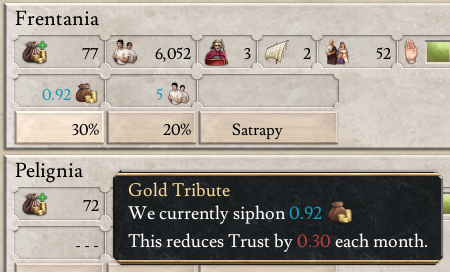 Many of the current benefits of the numerous subject types in the game, will be converted to obligations; actions or toggles that can be performed on your subjects and which will cost trust or trust growth.We’ll be looking at adding a few ways for subjects to interact with their overlord, too, but it is too early to tell quite how this will take shape.—There will be a host of minor changes, tweaks and additions, alongside these flagship features, and I’ll aim to cover those in a diary later on in the process.I hope you like what you see here; we’ll flesh out further details for each feature in upcoming diaries, but I hope this will be enough to keep you going until then!
/Peter
—
Join the discussion on our forums!