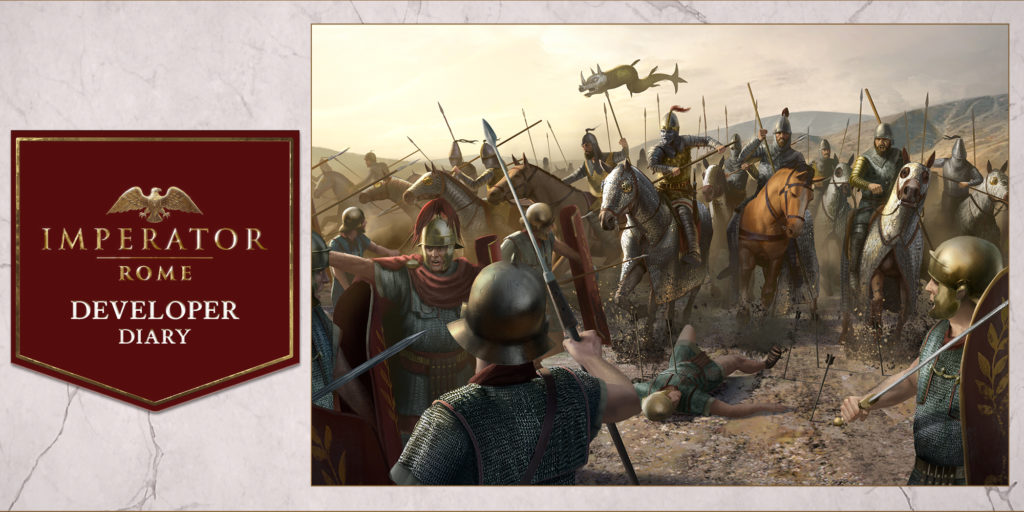 Today @Arheo and I will be covering the upcoming rework of republic government mechanics.

To begin with, I’d like to explain a bit about the process that led to the changes you’ll hear about.
The republican senate mechanics began their life as a ‘catch-all’ government type that was intended to represent all democratic nations on the map. During development, we realised we wanted to be able to have the senate able to act as a core consideration in a republic player’s game loop, by adding the ability for our Content Designers to add weights to individual actions, so that each faction could simulate an ‘opinion’, depending what you wanted to do.

It succeeded in part; the senate could be manipulated if you knew where to look, yet it was often very unclear why the senate voted any given way, without scrolling through a yard of tooltips and numbers. Perhaps even more importantly, it became such a huge task to consider every time we wanted to add new character or diplomatic actions, that ultimately it had to go.

So we went back to the drawing board. I had several primary goals in mind for the faction rework:

I’ll hand over to @Trin Tragula here, who’ll explain quite how we went about fulfilling these aims.

In a Republic the citizens of a state exercise power through an assembly and the most well known such assembly in our game is probably the Roman Senate.The historical senate did not have parties as such, but at any given time there would often be factions gathering senators around them. While all senators had the right to vote it was also not always the case that everyone made the choice of how to exercise that vote for themselves.

Just as often a senator would vote to satisfy obligations that he might have to one of the more politically active members of the senate, or along friendship lines. Likewise any assembly made out of people will feature some that are more impressionable than others.

In the Roman Senate those who voted without speaking were often referred to as “Pedarii” since voting was often conducted by Senators moving from one side of the assembly to the other to show their support or disagreement with the current speaker, and any politically ambitious Senator would have to have earned the trust of a number of such pedarii. Senate politics was often as much about how many others you could mobilize around you as it was about high ideas and ideologies.
Which is not to say that ideals were unimportant in politics, no senate relies only on favors to function, but the system that has been in the game up until now has been relying on parties always voting exactly along the lines of an imagined ideology on every issue, when in reality this influence is less direct and influential politicians could most of the time get support for their ideas based on a combination of trust and individual merit. 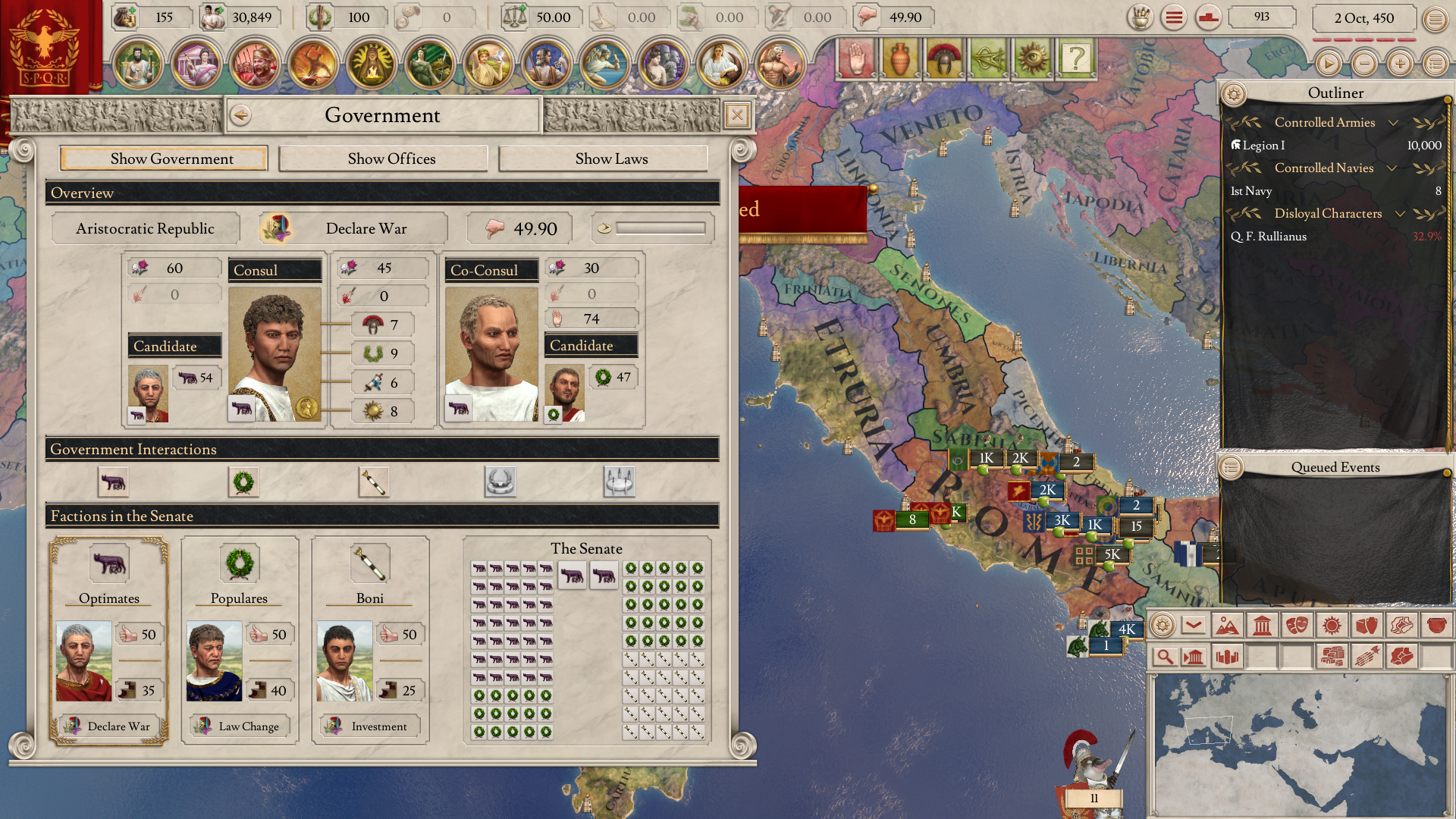 In the Menander update we have revamped the party system altogether. Gone is the large number of generic parties that corresponded to vague ideas and instead we have gone with parties that correspond to political groupings of the era. This also means that we now have 3 parties at any given time for you to balance, with their membership and influence more in flux. Rather than trying to map the parties to issues you care about we have also tried to make the issues the parties care about matter to you (more on that below).

The Roman Parties are based on the political groupings that existed in the later part of the life of the Republic though they do not mimic them exactly:

Optimates
This party represents primarily aristocrats of ancient pedigree. They oppose the rise of New Men and the influence of common people on the senate. The Optimates believe that the populares are a destructive force that will wreck the ancient privileges and traditions of the republic.

Boni
The Boni try to strike a balance between looking to the needs and wants of the poor masses, while still preserving stability and acting through gradual reform. They believe that the way forward is through the senate, and using the existing rules, rather than radical reform and empowering popular movements. The boni believe they are looking out for the best of the country as a whole instead of supporting any particular group in society. Their opponents believe they will favor the status quo at any cost.
In Roman historiography the Boni and Optimates are often used as synonyms. Here we use them to separate those that seek to protect and preserve the ideals of the old Republic, such as Cicero, from those that more purely seek power on the behalf of those already privileged.

Populares
The “men of the people”, claim to act in the interest of the common people such as indebted farmers, poor aristocrats and veterans that could not adapt to life after war. The Populares oppose the Optimates in almost every way. They are happy to overthrow old traditions and the privileges of the few, to empower and enrich the many and those who can sway them.

In the Menander update the votes that the parties of the Senate wield are no longer dependent on discrete modifiers, instead they come from the characters that are part of its membership.
Every character in a country will now have a Senate Influence rating, and when added together for all characters in a party this determines how many votes a party has. 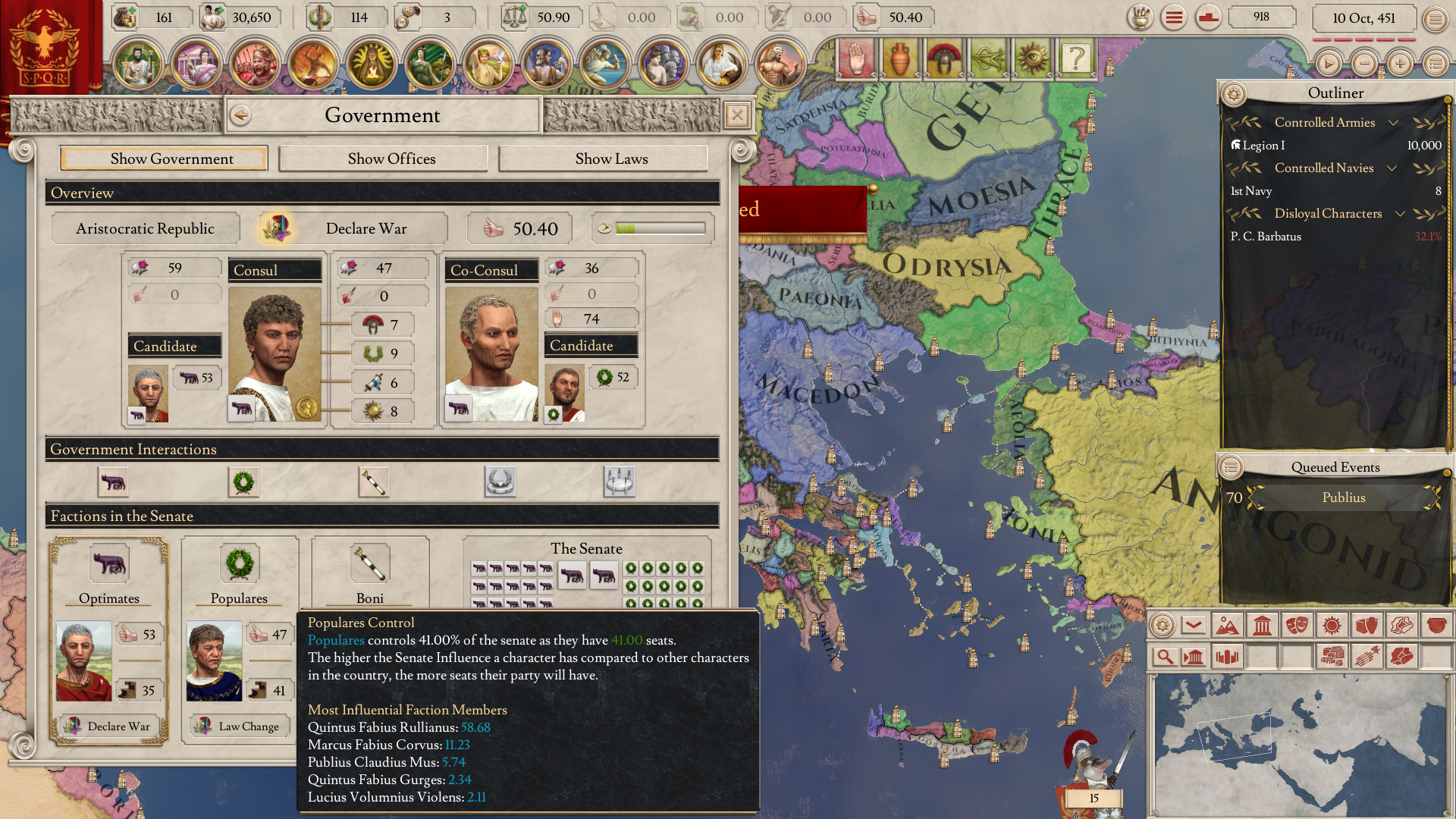 How much Senate Influence each character has can vary greatly. With some being good for many more votes than others. This means that it will now be possible to handle a particularly troublesome party by trying to get rid of their influential members. Should such a character abandon one party for another it will also now have a much more deeply felt effect.

The Senate influence of a character is based on their power base. But it is also modified by a number of factors, such as traits (an Orator will have increased influence, as will characters with high popularity) or jobs.
A character being made governor or general will see their influence sharply reduced, despite their now increased power base as it is hard (if not impossible) to exert influence over the Senate when you are not in the capital. 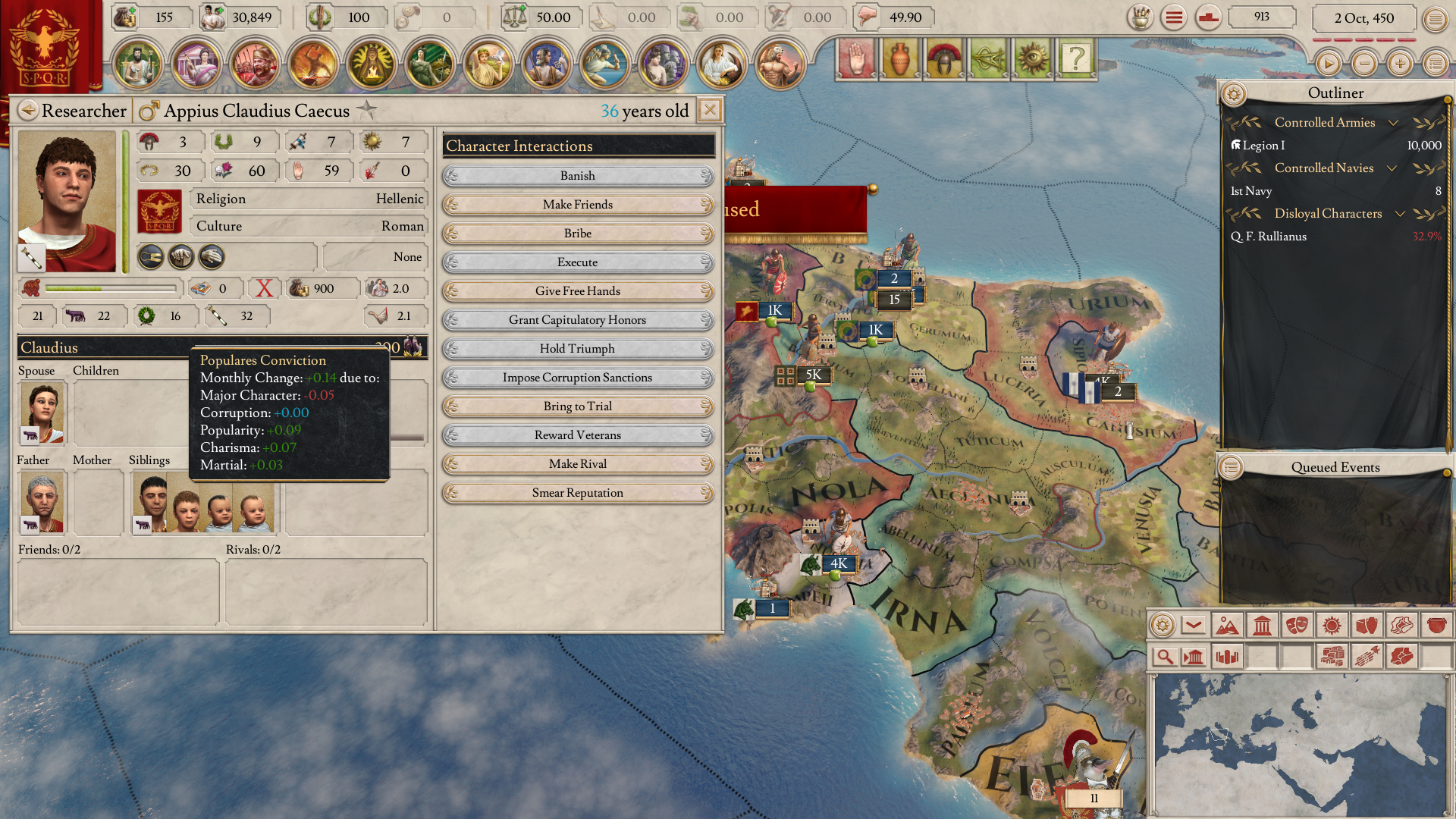 Likewise the factors that contribute to a character changing their party membership have been revisited, with their personality traits and social standing now playing a much bigger role in where their loyalties lie. Some further examples to illustrate this are is that some characters that are less independent minded will tend towards supporting the party of their Head of Family, while others would shun the party of their Head of Family for exactly that reason. 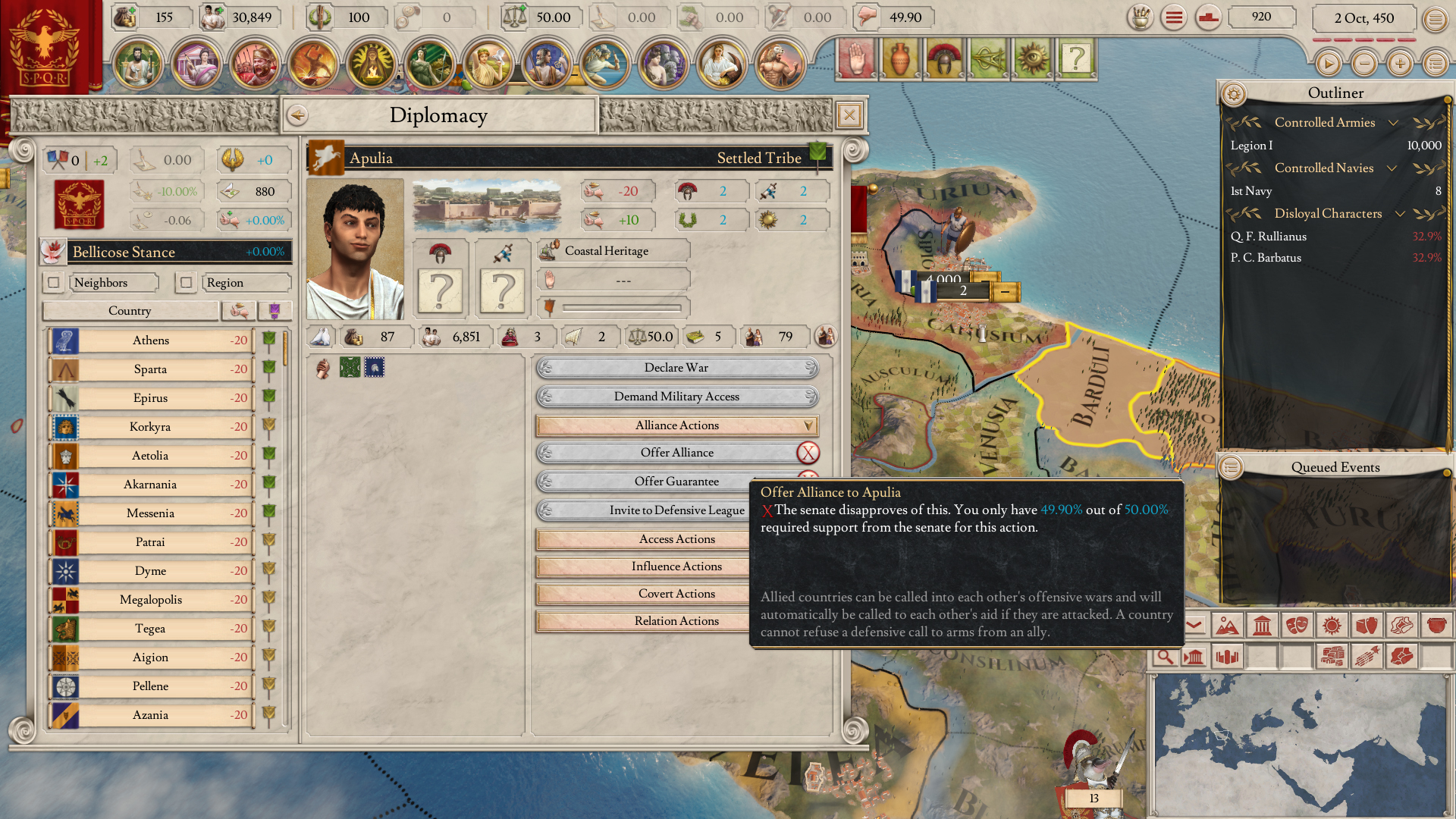 Just as before the parties of the Senate will be able to vote on many of the actions you take, and will be able to obstruct the rule of a weak consul. As seen above their power to support or obstruct your actions hinges on the influence of their members. Their willingness to support you however is no longer dependent on the action being taken. Instead every party will now have an approval value, reflecting the favor you have gathered with this party through your actions as a ruler. If you give land to heads of families the Optimates will approve, but if you hold triumphs for Minor Characters they will lose approval. Members of the Boni will applaud upholding the ideals of the Republic, while Populares and Optimates will both favor curtailing them in various ways.
Ideas and political interests thus remain very important to the functioning of the Senate, but you can also reliably muster support for your actions buy ensuring that all parties get to do at least some of what it is they want. 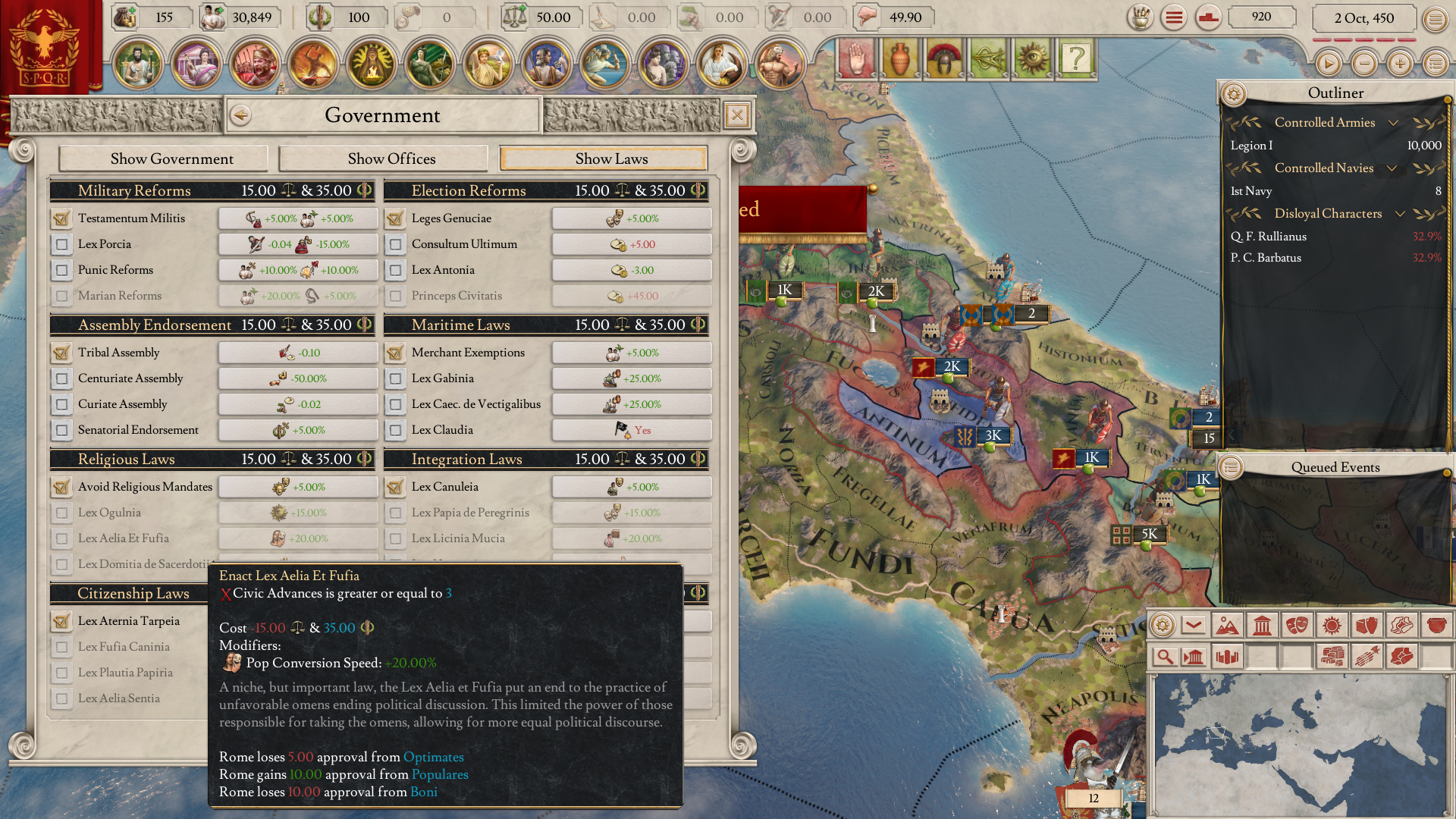 Approval is useful since it determines how parties will vote. As long as you have sufficient approval from the parties in your Senate you can do _almost_ anything (the current Support you have in the Senate is something you can always see in the top bar).
Should you abuse this power however it may come back to harm you, the parties have opinions on everything you do and if you use their votes to do things they do not approve of they are unlikely to support you in the future.
This is especially true if you stop them from pushing through their Party Agendas… 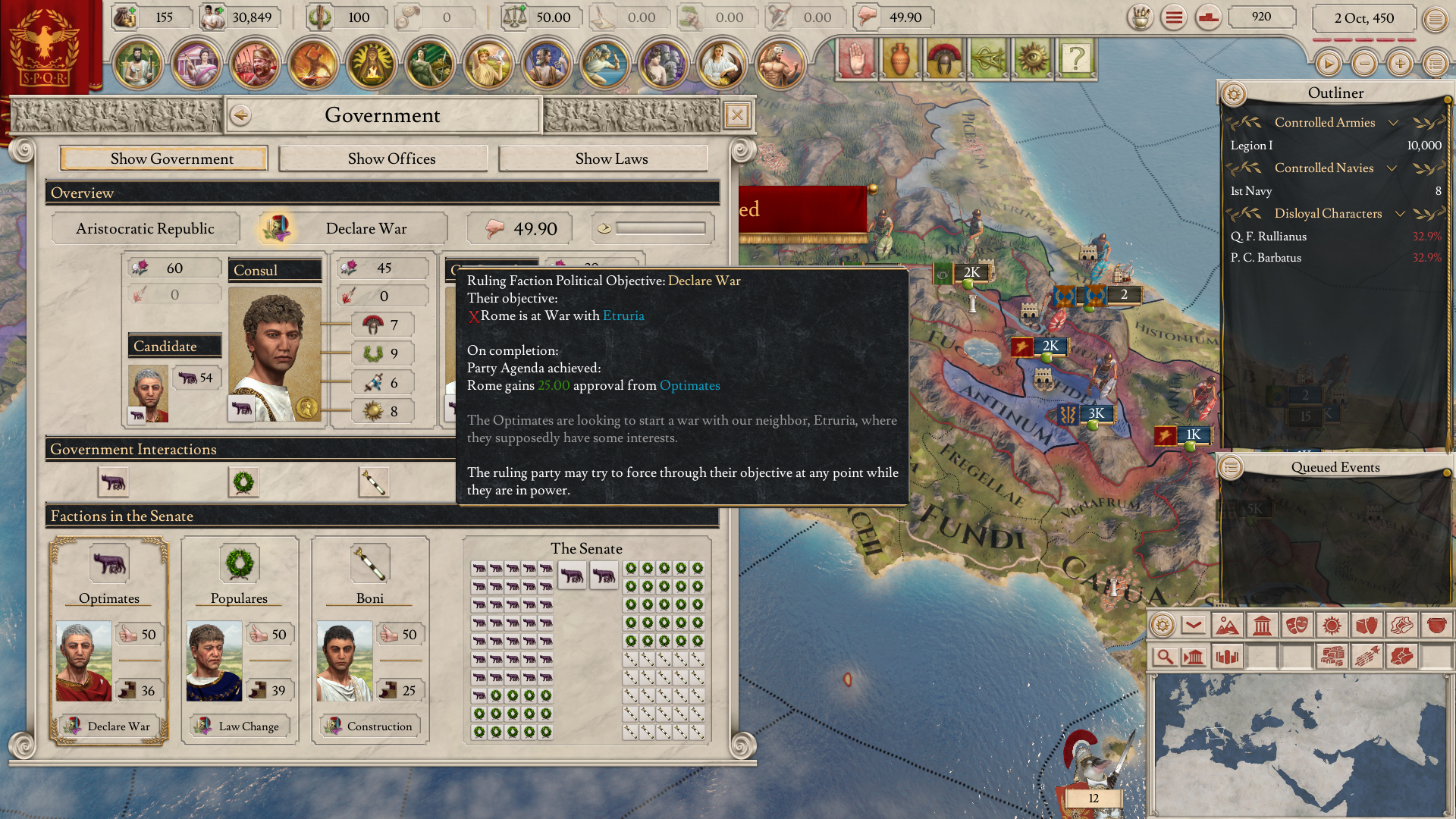 At any given time every party in your Senate will have an Agenda that they wish to see fulfilled. These are always visible in the government screen and can range from quite reasonable things like improving the infrastructure in some province to far less easily accommodate things such as the changing the laws, or confiscating land from Heads of Family.
Sometimes the parties will even propagate for the declaration of war on other countries.

Should you at any time fulfill the Agenda of a party you will have their gratitude, in the form of a nice boost to their approval in the Senate.

You cannot however rely on the parties staying silent about their Agendas. If one of their members holds the consulship they will expect to be able to fulfill their Agenda. As long as there is sufficient approval you can be sure that the party in power will try to push its Agenda through the Senate. When this happens you will be presented with a choice of either allowing it or using the Consular Veto, which will stop the agenda from being pushed through during this term. 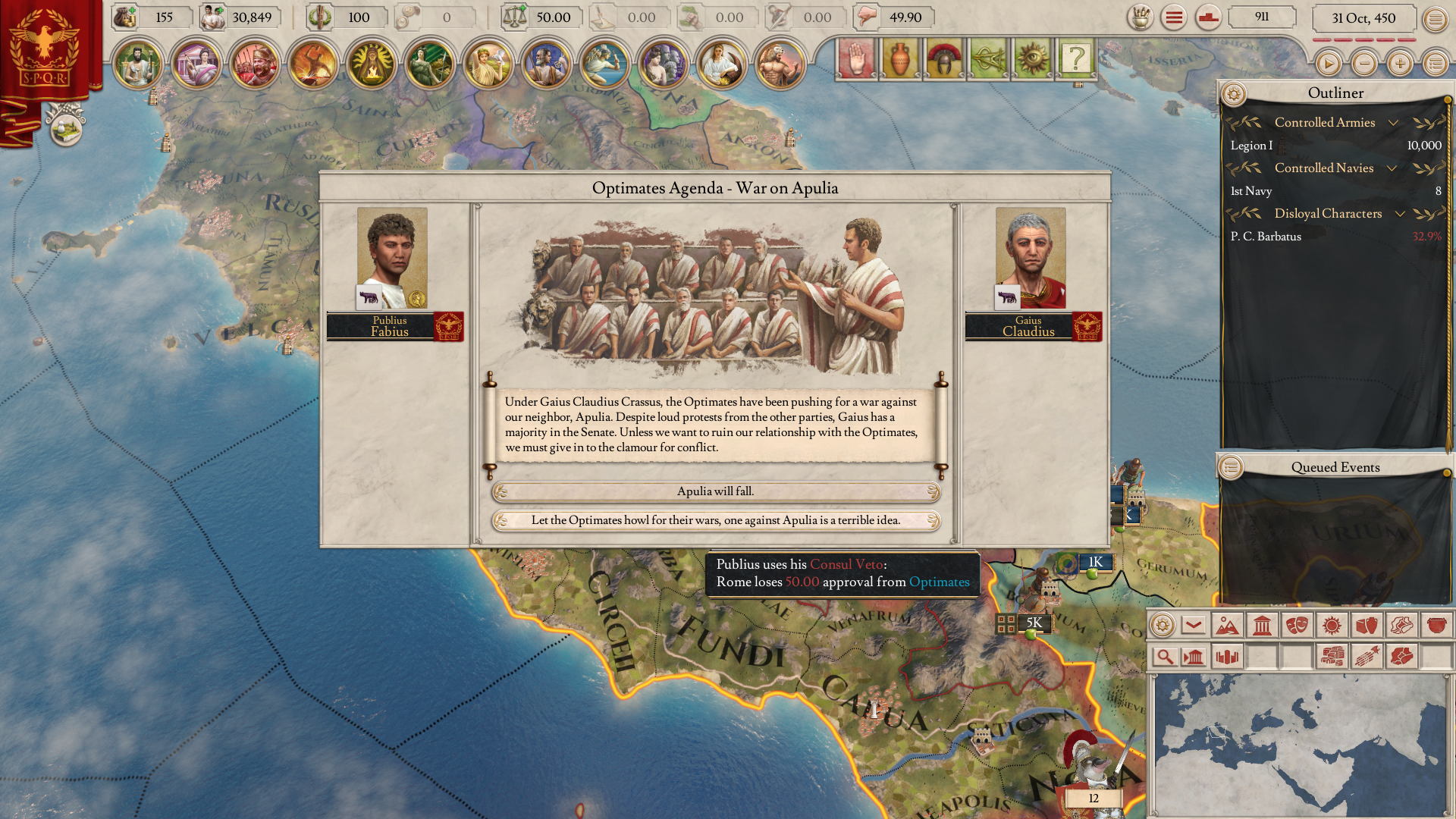 This Diary has focused on the Roman parties but we are revamping the system for all Republics in the game. Menander will also feature 3 new parties for other Republics, which are more inspired by the world of Greek Politics, but also more general since they need to work in many parts of the world.

The Oligarchs
This party represents the richest members of your society, as well as the ancient noble families. They seek to increase their wealth and power and are less afraid of making use of the masses to reach their goals than the Roman Optimates are.

The Democrats
Democrats seek to preserve the freedoms of the citizens in their society, they are less focused on personal honor than the Roman populares but just as intent on acting against the interests of the Oligarchs.

The Traditionalists
The traditionalists are focused on avoiding disturbing the gods and preserving the privileges of the priesthood. They are no pacifists but they will oppose the sacking of holy sites of your religion and will in general take a conservative position on many things. Where the Boni yearn for the old Roman virtues and the founding principles of the Republic the Traditionalists are far less concerned with such political ideals.

Since we want to take the time to make them special we have for now focused on making the Roman parties perform as we want, and adding a reasonable general setup for the other (largely but no only Greek) Republics. It was important to us that even these generic parties should model real life social struggles and interest groups, since that was in our opinion one of the major failings of the old system.
In the future however we want to add more country or culture specific parties to Republics around the world. Something this new system should lend itself well to support.

As usual anything you see here is subject to change to some degree even if the underlying mechanics described are accurate for the current state in development.

Whether you are playing with the Roman parties or the more general ones we think these changes significantly change how Republics play and we hope you will enjoy it.