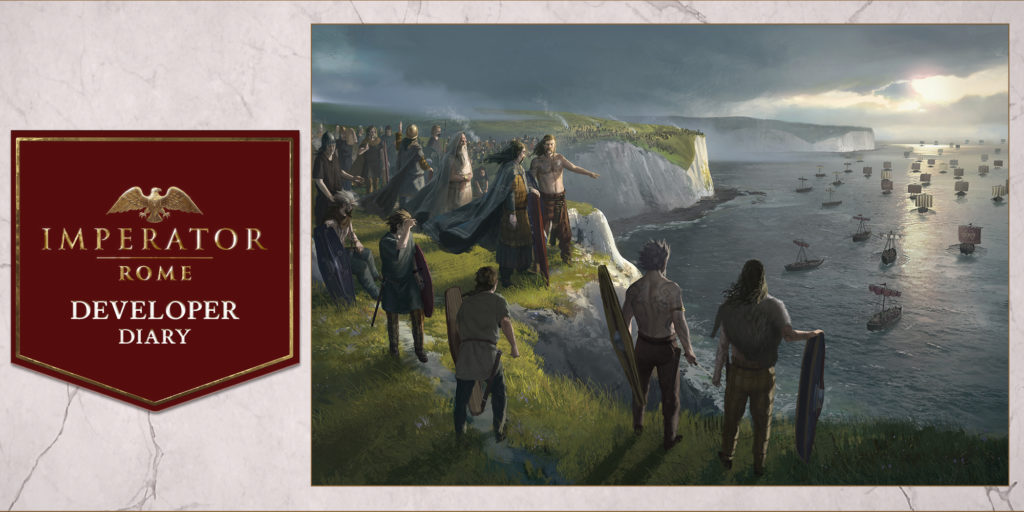 Disclaimer: the first bit of this DD talks about the internal nuts and bolts operation of a dev team itself, not game features. If that doesn’t interest you, you can safely skip to the second portion with the gameplay screenshots.

Hi all. Jamor here with this week’s Imperator dev diary. Some of you may be wondering, “who’s this dude, he’s not Arheo or Trin Tragula?”. Well, I could never step in to those inimitable shoes, but I am in fact the producer of Imperator: Rome.

Now what does that mean, exactly? Often I see people mixing up the roles of Game Director,Technical Lead,and Producer when talking about our teams. This is entirely understandable since in the old days, when PDS was a lot smaller, the roles were often combined in one person. However, when a game and the company as a whole gets to a certain size and complexity, it pays to get specialization of effort. Here’s what Arheo (GD), Egladil (Tech Lead), and I do:

Game Director: the owner of the creative vision for the project. Head of Design. Decides ‘what’ we are going to try to do.

Tech Lead: runs the technical implementation of the game, all its features and under the hood systems. Leads and organizes the work of the programmers. Master of the innumerable builds and branches we maintain, figuring out when to merge branches in to the main trunk, all that stuff. Figures out the ‘how’ part of carrying out the goals set by the GD.

Producer: in charge of time and budget. Making sure we put all the pieces of the puzzle together, programming, design, art, writing, script, localization, audio, backend and store pages for all the various places our game is sold, so we can get a video game product out the door and in to your hands. The slave of time, the one resource that once spent, can never be got back. Decides on the ‘how much, and when’.

We have a lot of autonomy within the dev teams at PDS compared to other parts of the industry. This triumvirate makes most of the tactical decisions about the project, where we settle on a scope that’s deliverable with the time and resources we have. My colleague Shams Jorjani likes to say that “ideas are cheap”, and he’s 100% right: good ideas are the absolute easiest part. Everyone has them. The mind freed from any practical constraints and operating purely in the realm of unfettered imagination is an incredibly creative thing. When we get back to reality though, we have to have the self-discipline to temper our exuberant dreams in to something that is shippable with the team and time slots we actually have, in the real world where deadlines and interdependencies and team bandwidth exist. If we said “yes” to everything, we might ship a perfect, world-changing video game in 2058, but the lights would be off a lot sooner than that. That’s where I come in.

So what does all this mean and why is this guy taking up a DD slot?

First answer is, Arheo, Egladil and the rest of the team are working on finishing up 1.5 Menander, and I want them to have maximum focus on that right now. But also –

Subject progression, the system of evolving relationships between overlord and subject that we announced in the first overview of Menander, is cut from 1.5.

In my role, I have to keep on top of project scope. What that means is, do we have the people, time, and capacity from our supporting teams (like DevOps, Product Launch, QA, Art, Audio, Localization), and general ability to ship this update with this feature set? Can we hit a date that has to be agreed with external partners like the digital stores we’re on, months in advance?

If upon digging in to implementation and finding out that we were too ambitious with our desired content for the release, the answer becomes plainly “no”, I have to step in and reduce scope. Sometimes, sadly, that means cutting a feature. We always try to do this before it is announced to you, the fans, but there’s a constant conflict between wanting to avoid building false expectations versus wanting to meet the demand for news about future content. In this case, we announced the feature, then when we got in to implementation found out the 1.5 update was going to be heavier than we thought. So, unfortunately, something had to come out. That’s when duty obliges me to put on the black hat and get the chopping hatchet out. It’s disappointing for us as much as you, but now at least you know who to be cranky at. It’s not my game director, tech lead, or anyone else on the dev team, nor on the biz side of the company. Odd fate decreed it would be me, an old QA guy and fan of more than a decade. But as we say, “it is what it is”.

As a long time Paradox fan who moved halfway around the world after playing our games since HOI2, I gotta tell you, cutting sucks. I’m a gamer too, and I want the cool thing in as much as anyone. But if that cool thing puts us over capacity, to the point where I’d have to ship it with terrible quality or at too harsh a cost on my team’s well being, I gotta cut it. There’s a saying in the games industry, that you have to be ready to kill your babies: what they mean by that is, working in this creative field that is ruled by practical limitations of time and resources, you have to be prepared to delay, shrink, or cut your features sometimes. It’s just like any other thing in life where hopes meet reality.

What does this mean? Is subject progression gone forever? Probably not, in fact. As you might know, Imperator is trying out a new mode of releases for PDS. We aim to do smaller but more frequent updates compared to the massive once or twice a year things our other games have traditionally done. I’ll tell you the same thing I told my guys, when I ran the numbers and things didn’t fit: this feature is very cool, and it deserves better than to be rushed out with poor quality. We’ll pause it for now, and come back to it in a future release when we have the time and resources to do it justice, and make something the fans deserve. With this new style of more frequent updates, that might not be too far off in the future, wherever we can make it fit. For now, our focus will be on getting 1.5 fun, stable, and playable by all of you in time for the summer vacation period.

So. I know this has been a bit of a departure from the normal DD, but I hope this glimpse in to the reality of production has been illuminating for you. I’ll try to answer the questions I can in the thread.

If you want to hear more about my mindset and techniques in production, the delicate art of balancing creativity and reality, here’s a talk I did at PDXCon 2018:

Also, to soften the blow a bit, here’s a message from our Game Director about some cool stuff that is going in to 1.5 Menander:

This week will not be lacking any feature reveal however, as I show you a small project I’ve been working on in response to many of the comments about pops and pop-classes, that I read following the reveal of the nobles poptype and cultural integration.

The trade module of the game is something that I believe has the potential to augment the pops system considerably, and should be vital to a functioning empire. In its current form, however, trade can be hard to get into, difficult to rationalize, and fails to accurately portray the sheer economic power behind goods such as dyes and spices.

What this is -not-, however, is a full trade rework. Though there may be a time to cover trade in such a manner, the purpose of this small redesign is to both integrate trade to the pops system in a more rational way, and to add some variety to tradegoods while culling some of the modifier duplication.

As you can see here, nobles (and citizens) will now be responsible for flexing their buying power, contributing to the number of trade routes present in a province. This value will directly correlate to the number of citizens and nobles, and will not take pop happiness into account.

Commerce generation has been removed from pops, with the aim being to use trade routes to generate wealth and to keep pops happy. Nobles currently produce a significant amount of research, and play an important part in the tech system; with a moderate number of nobles doing the lion’s share of the work in contributing to state research. Their happiness however, will still be a significant hurdle to overcome.

Old buildings have been slightly repurposed to augment the number of trade routes that you’ll get from pops in a city, and work is ongoing to redefine how provincial investments will apply to the trade module.

Is that it? Certainly not.

What about trade goods themselves? Well, most goods will now contribute a small amount to the happiness of a poptype, and will be categorized as such:

This ‘local’ bonus will now stack in the entire province, effectively rolling the provincial capital bonus and the province bonus that used to be present, into one.

Capital surplus has remained untouched, as this was always a pretty cool way of contributing to the uniqueness of your nation, choosing which goods to ‘spec’ your country with.

Export bonus has been entirely removed, as this was something that was the hardest for me personally to rationalize, and added another layer of decision-making to every trade offer or deal with a foreign nation.

What the eagle-eyed amongst you will notice, is that it has been replaced with a Base Value. This base value is related to the value of the good itself – Papyrus commands a hefty price of 0.4 gold per month, whereas Leather is valued at 0.15 gold per month.

Importing a tradegood will earn you only 35% of the value of the good, and internal trade even less. Exporting is where the true value lies, with 100% of the trade taxes flowing directly to your coffers. It’s important to remember here, that as the government of your nation, you aren’t purchasing the import of a trade good; you’re encouraging the creation of private trade in that material from A to B. There is no reason you’d be paying to import material, although the taxes you earn will be less to simulate the amount being spent to keep the route running at your behest.

That’s about the extents of the tradegood rework I had planned. Let me know what you think in the comments below, and as usual, everything you see is WIP; especially numbers!