Today we’ll be covering changes to Military Traditions, as well as showing you some iteration points on the new invention system.

Military traditions will be receiving a similar treatment to inventions, in that they will now exist in a tree-structure, with a modicum of choice, and continuing to be unlocked by their own unique resource, Military Experience.

The military traditions screen currently appears as below; though it’s worth noting that this view is very WIP, and is likely to be entirely changed in the near future. 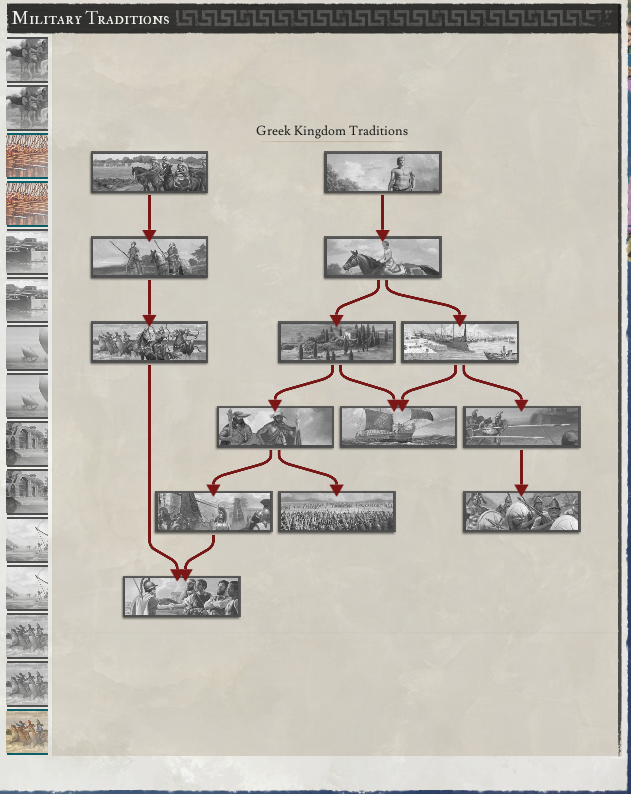 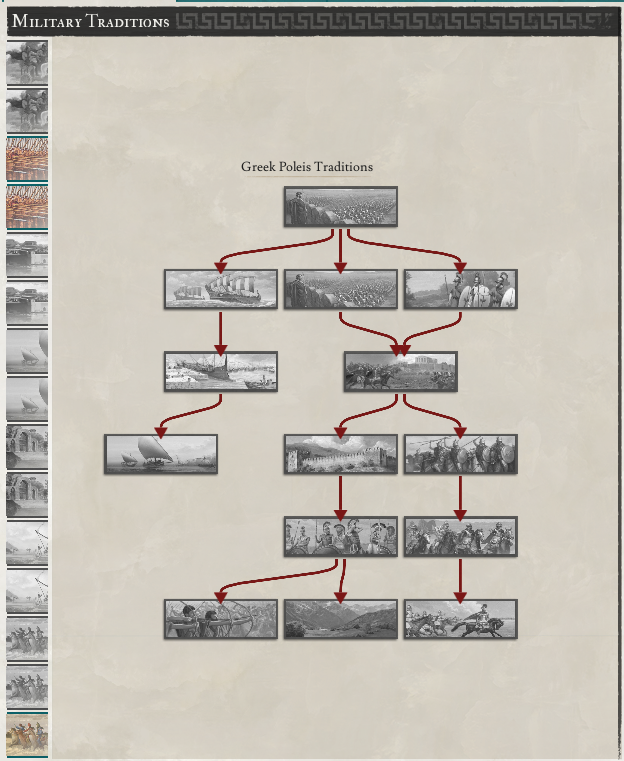 As you can see here, there are now twice as many trees as before – we’ve split up the existing trees into two themed parts, such as Greek Kingdom traditions and Greek Poleis traditions.

As a Greek, for example, I would be able to follow either of these trees at the beginning of the game.

The bonuses themselves have received a balance pass, but haven’t changed drastically at this juncture; the military flavor and abilities unlocked from old trees have been preserved and distributed, however, there is one notable exception to this: 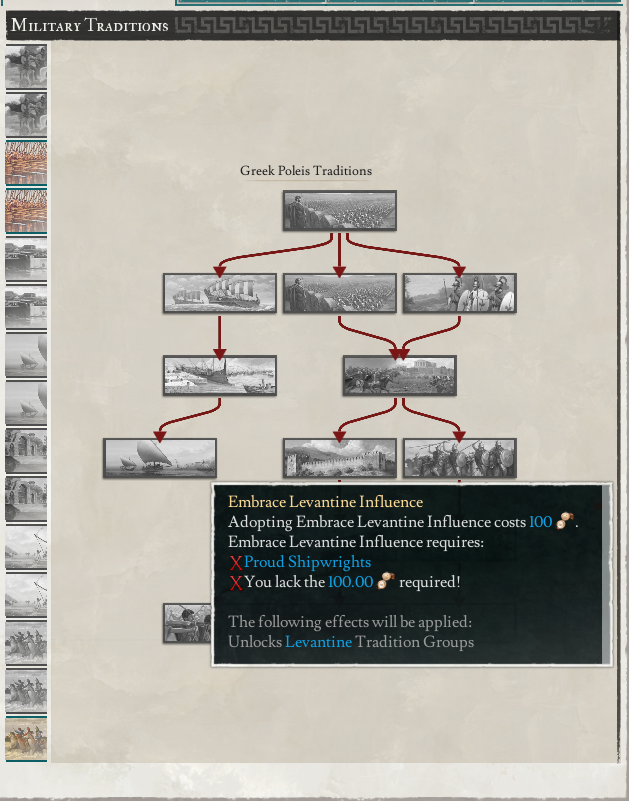 Each of the new trees is now explicitly linked to a geographically adjacent or culturally related set of tradition trees; the Greek Poleis traditions, for example, allow you the ability to unlock Levantine traditions. Likewise, the Roman traditions allow you to opt-in to Greek traditions should you so desire.

The unlock nodes for these particular traditions are usually separated from the rest of the tree – it should remain inefficient to look further afield, though the opportunity to craft your civilization in different ways is a core part of the vision I have for Imperator.

This does of course mean that should you be able to generate enough Military Experience (the sources of which will be discussed in a future dev diary), you will eventually be able to unlock almost any tradition category from anywhere in the world. This is likely to require a campaign’s-worth of experience gathering, however.

We’ve also added instant effect blocks to these traditions, so as per inventions, we’re able to fire arbitrary script effects on adoption of a specific tradition – how exactly we’ll use this is as yet undecided, but gives both us and modders a lot more power over making trees feel unique.

And now we’re back onto inventions!

The technology and inventions dev diary was very well received, but also came with some constructive community feedback.

As we mentioned, we hadn’t quite decided how to deal with invention cost – so based on feedback and balance, we’re dropping the gold cost for inventions. Innovations (as mentioned last week) will be required to unlock inventions, but will now be the sole resource for doing so. These will still be generated through technology levels, but may also be granted in special cases from elsewhere.

This means that unlocking all inventions over the course of a campaign becomes more or less impossible – what becomes important is the path you will take through them. This also added the need for more character and identity for some inventions, in order to be able to craft your civilization into something unique that differs from playthrough to playthrough: 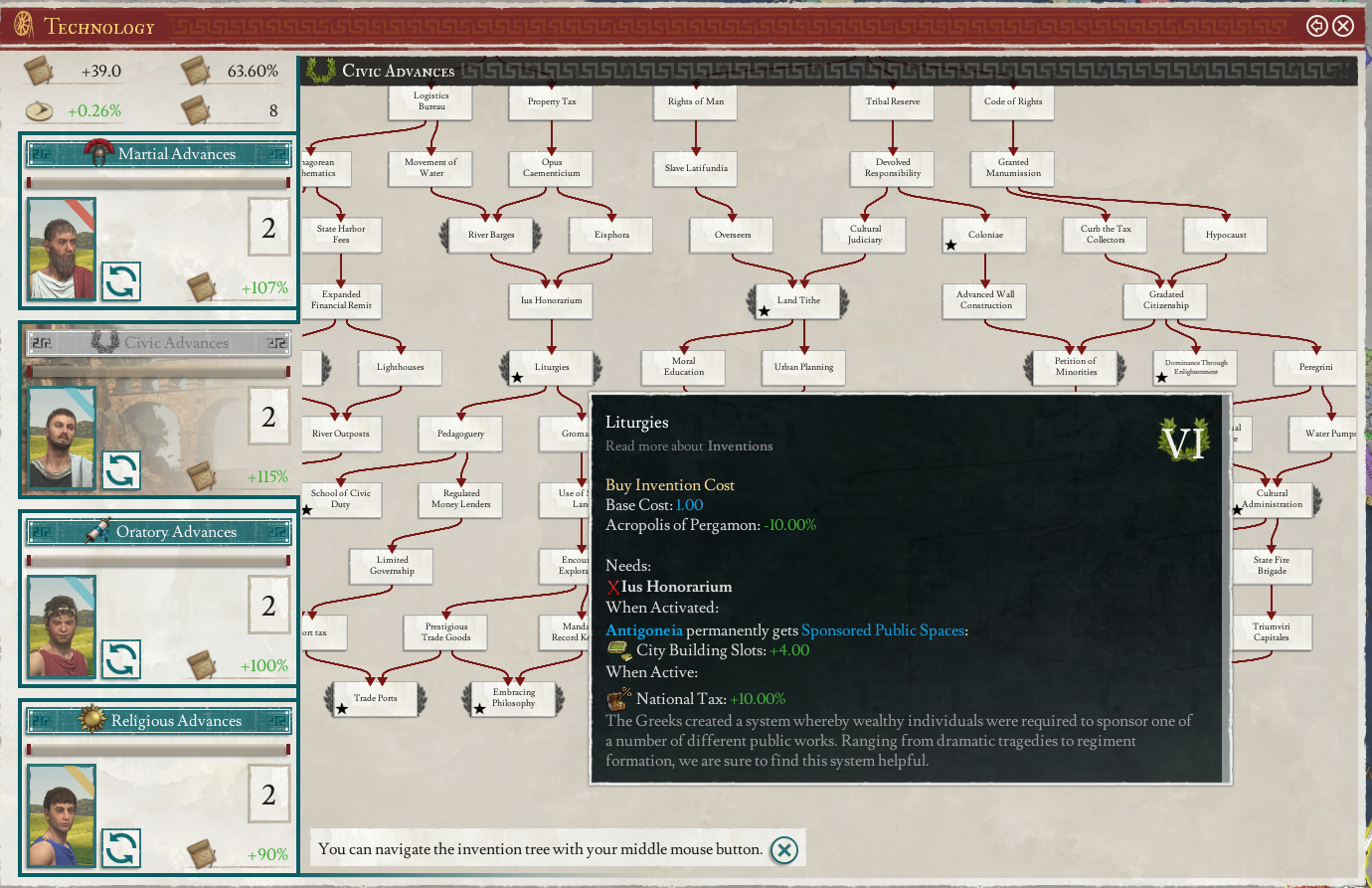 (Visuals still WIP! The star means nothing, and is debug only )

Here, we’ve added another layer of choice-making. You’ll notice above that some inventions have a unique ornament. This indicates a cornerstone invention that has significant or gameplay altering effects.

This can be a significant modifier boost, however it can also be one-shot effects such as raising stats of important characters or rulers, unlocking related aspects to features (for example, Great Wonder building effects), or changing how you interact with characters – I’ll provide a few examples below: 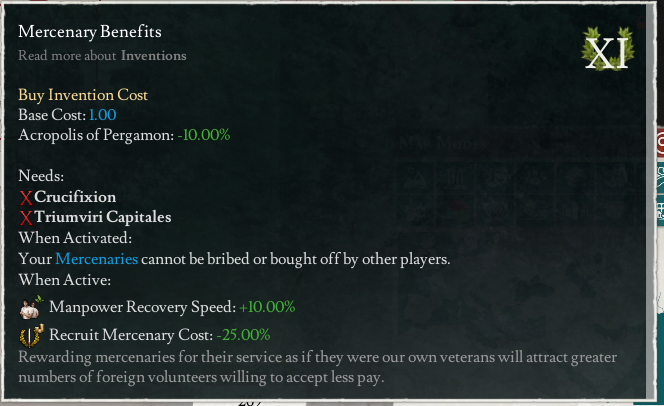 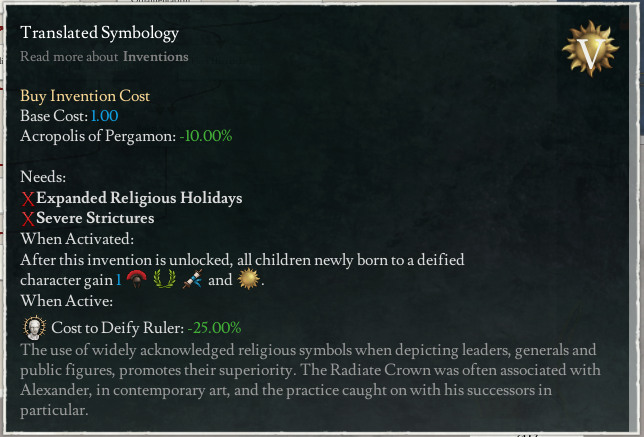 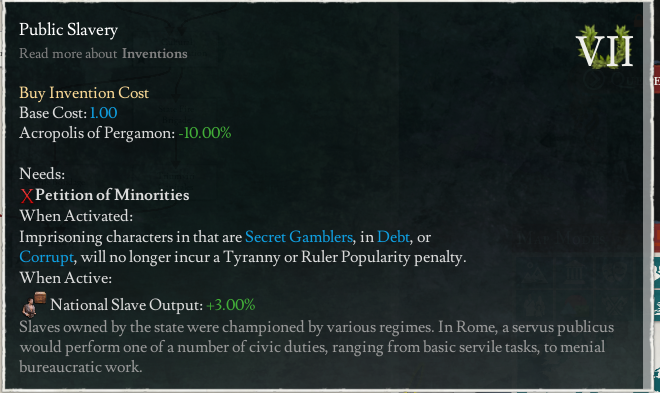 Another UI solution you may have noticed, is that these tree screenshots have all appeared at different zoom levels. We’re implementing a common zoom-area utility for tree-graphs such as Missions, Inventions and Traditions, which will function similarly to the focus trees of HOI, or the family tree viewer in Crusader Kings III.

That’s all for now – until next week!