Guide to the Archimedes Update and Magna Graecia 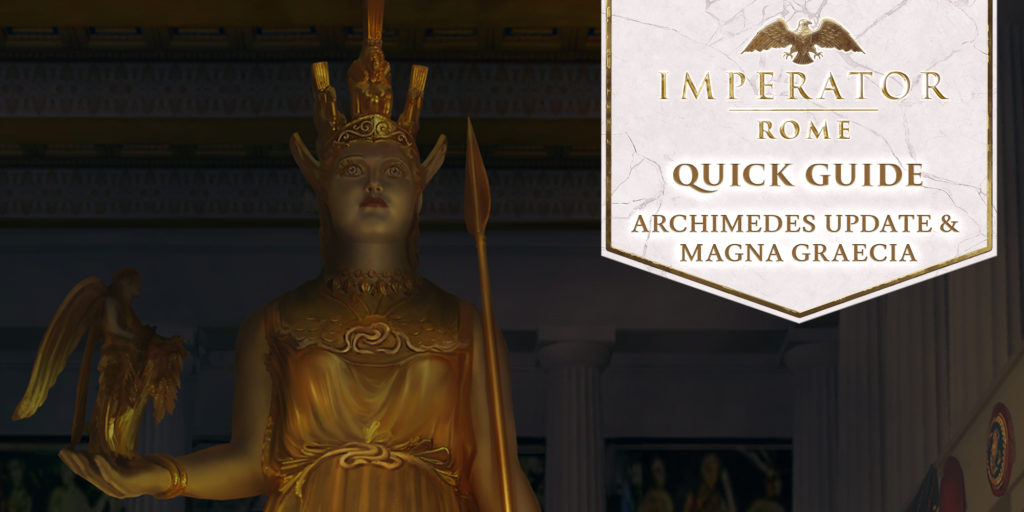 The Archimedes update to Imperator: Rome focuses on religion. For those of us living today, whether from secular households or modern interpretations of Abrahamic faiths, ancient religion might seem quite foreign. Classical religion walked that line between devout adherence to superstitious ritual and conviction that the gods walked among us and divinity could be achieved by great feats here on earth.

Monotheistic faiths were viewed with skepticism, foreign gods and cults could be welcomed into a new national belief system if widespread enough, and gods could be placated with offerings of battle trophies.

This very short guide will walk you through the major changes in the free 1.4 update to Imperator: Rome and highlight where the Magna Graecia content pack adds to the game.

Imperator: Rome’s religious system, to this point, focused on invoking Omens to bring blessings to your nation. Omens could be strengthened, but they generally didn’t give you a lot of flexibility or interaction with the structure of your state religion. Each culture had a fixed set of deities, whose roles and benefits were mostly interchangeable.

Archimedes replaces that system with a State Pantheon. Each nation now has a roster of four deities who give passive bonuses to the nation. If you invoke a god’s omen, they add an active bonus to their passive one. Deities are loosely associated with War, Economics, Fertility and Culture.

But your nation will have more than four deities available to worship. You may want a different military bonus than the one you have in your Pantheon. So, you can replace, for example, a War deity devoted to Morale could be replaced with one who will improve your Manpower. 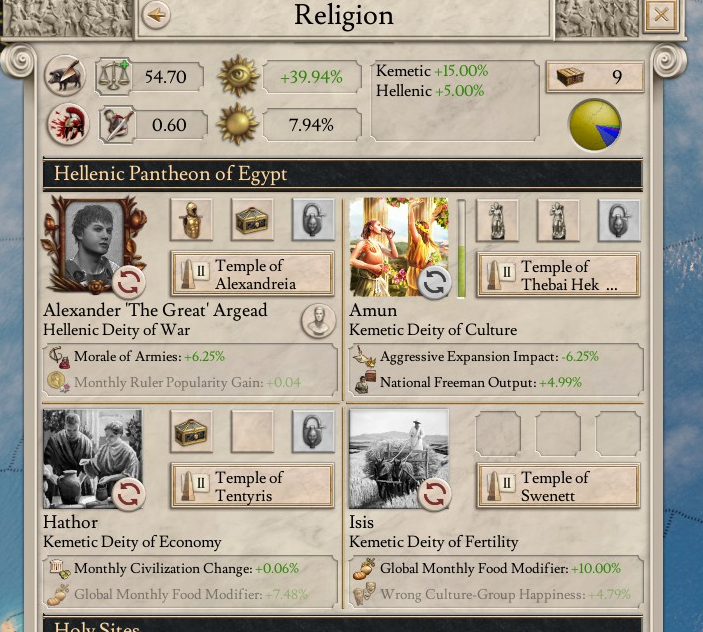 You can only swap out deities in your Pantheon once every three years, and there is a stability hit for doing so. You are also unable to invoke the new god’s omen for the first three years of their presence in your Pantheon. So make this decision carefully.

In the Magna Graecia Content Pack, Sparta, Athens and Syrcausae all get special Hellenic variants of the usual Olympian gods.

You can change a deity in your Pantheon by clicking on the arrowed circle to the bottom right of the god’s portrait on the Religion menu. To invoke an Omen, click on the portrait. 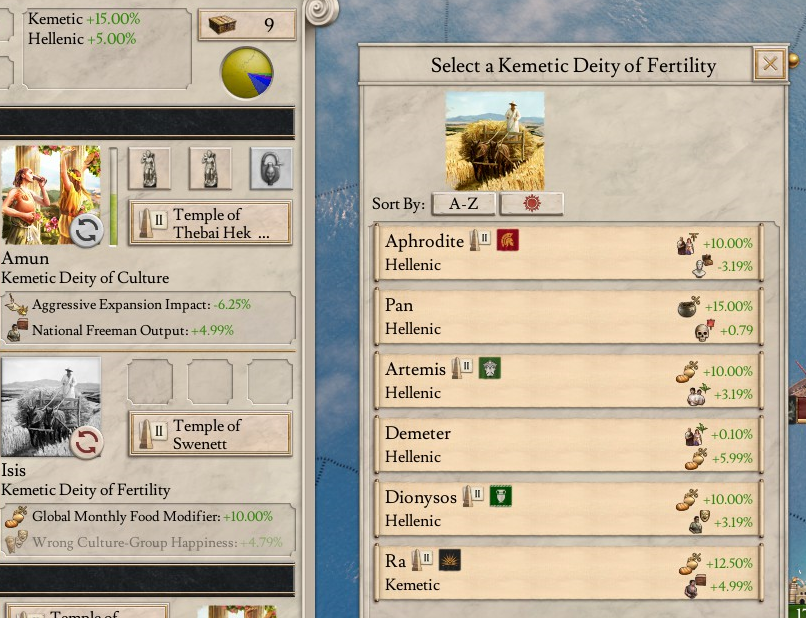 Rulers of ancient polytheistic cultures were not especially interested in a religious orthodoxy that banned foreign gods. So, a multicultural society in Imperator: Rome may now create a Pantheon that draws from multiple traditions. This is especially relevant for Ptolemaic Egypt, a society that was ruled by a Greek and Macedonian elite, but still paid homage to local Egyptian deities.

However, your subject population groups will all have the things that THEY believe. A Hellenistic citizen in Alexandria will not be especially thrilled if the state Pantheon is all Osiris and Amun-Ra. Population happiness is tied to how well their faith is represented in the State Pantheon.

You can “acquire” foreign gods to worship if you control one of their Holy Sites.

Likewise, foreign nations who follow certain gods will be more likely to look kindly on you if you include some of their deities in your Pantheon.

Some mortals live such outstanding lives that their contemporaries come to see them as divine or semi-divine. Alexander the Great is the most notable example of this from the time frame of Imperator: Rome.

In Magna Graecia, characters of great power and prestige can be declared divine and join the State Pantheon. If your entire Pantheon is filled with divine rulers, you can institute the Imperial Cult form of government.

Characters that are gods take the place of another deity eligible for a Pantheon, but can get their own unique Holy Site and treasures.

Monotheist religions, like Judaism, get Pantheons but with a few differences. First, their “deities” are prophet and patriarchs, not gods. These are humans who are revered and are, for game purposes, treated identically to Deified Humans, like Alexander the Great or late Hellenistic or Roman Imperial monarchs. (In the game, we use the term “Prophet” to refer to all Jewish targets of reverence, even though many were not, strictly speaking prophets.) 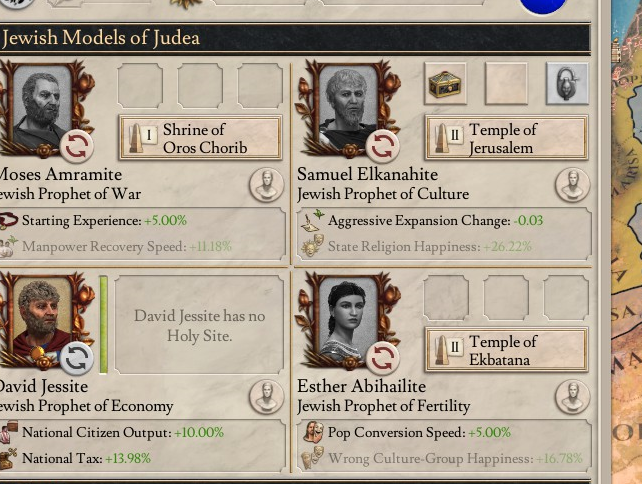 Monotheist religions cannot adopt the gods of other nations, and therefore have a more limited roster of pantheon candidates. To counter this penalty, Monotheist omens have a longer duration once invoked.

Another big change in Archimedes is the introduction of Holy Sites. The ancient Mediterranean was full of sacred groves, oracles and special temples dedicated to specific deities or aspects of that deity. The famous Oracle at Delphi, the temple of Artemis at Ephesus, the temple of Marduk in Babylon…all holy places that allowed worshipers to feel closer to the divine spirit of a particular god.

In this update to Imperator: Rome, each deity can have only one Holy Site and control of that location will boost the effects of both the passive and active effects associated with having that god in your Pantheon.

There is no penalty for owning a Holy Site dedicated to a deity not in your Pantheon – a good player will eventually control many more than four Pantheons. However, control of a Holy Site dedicated to a foreign god may also add that deity to your options when you want to rotate in a new god for the Pantheon. So, if the Romans conquer Alexandria, the location of a Holy Site for Alexander the Great, the famous warrior king is now an option for the Roman State Pantheon. 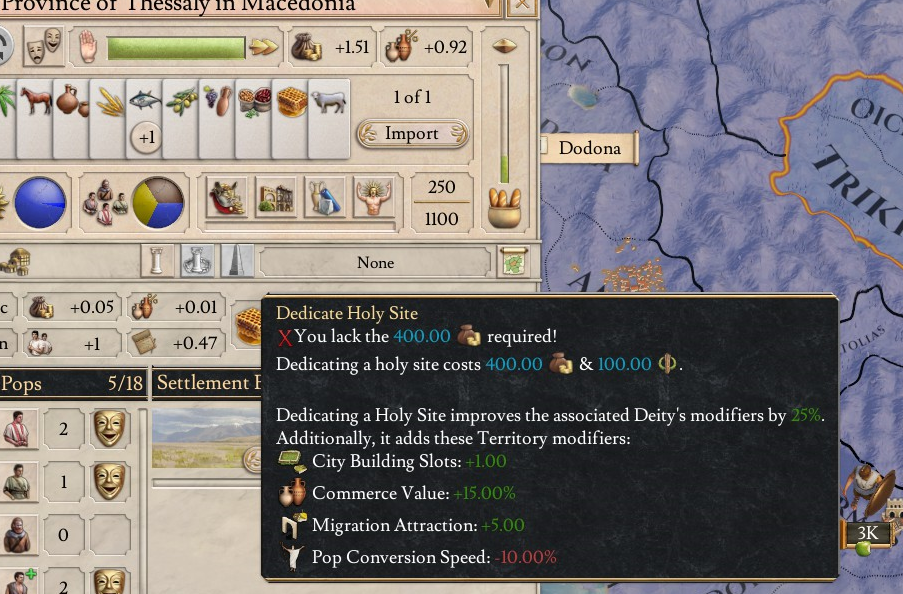 Not every deity starts with a Holy Site. If you wish to dedicate a Holy Site to a preferred god, you can do so by choosing a province for it, and spending gold to build the temple. New Holy Sites add a building slot to the city, increase migration and increase trade value. They also make the city much harder to convert to a faith different from that of the Holy Site.

You may also, if you wish, Desecrate the Holy Sites of foreign gods, greatly damaging your relationship with followers of that faith, but giving you the chance to rededicate the site to one of your own deities.

Holy Sites have three levels corresponding to the size of the city they are in. Holy Sites in Settlements are Level 1, Cities are Level 2 and Metropolises are Level 3. The level of a Holy Site determines how many sacred treasures can be kept there.

You can see the Holy Sites on the map by selecting the Religious map mode. If you click on a city, you can then mouse over the obelisk in the city detail panel to get more information about the site. 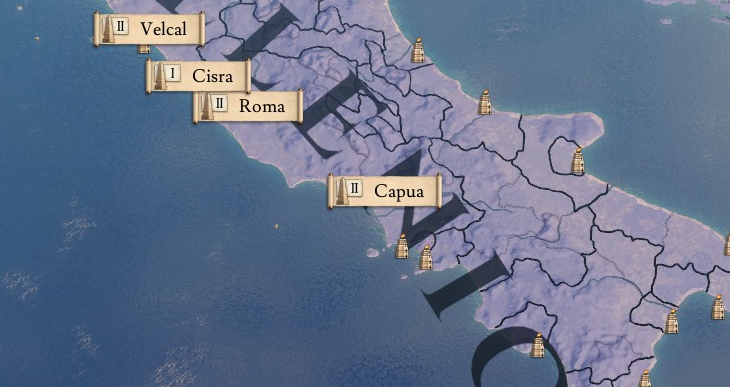 Ancient religion was very tangible. It was expected that the gods had a deep interest in the material world, and would appreciate material tokens of worship. Sometimes these took the form of great statues, like the famous one of Olympia Zeus at Elis. Other times, the preservation of holy relics associated with the god’s times on earth would be kept and revered. Finally, memorials of battle or great leadership would often be dedicated to gods, old and new.

In Archimedes, Holy Sites have space to keep sacred treasures – statues, relics, loot – corresponding to the level of the Holy Site. Level 1 has one space, Level 2 has two spaces, Level 3 has three spaces.

Each sacred treasure dedicated to a god in your Pantheon comes with bonus effects that apply to the entire province where the Holy Site is located. You may move sacred treasures from Holy Sites you control to those of gods in your State Pantheon, or replace existing ones with items you have in your state’s Reliquary (which you can see in the upper right of the Religion menu).

Loyalty is one of the most important attributes of characters in Imperator: Rome, and has, to this point, been represented by a ticking percentage that would go up or down over time. Though this reflects something true about how loyalty works in the real world – it is not a constant – as a game concept it proved hard to interact with. You would be told when a character was disloyal, but it was hard to track when that downward slide was starting or how you could intervene to stop it.

Now, Loyalty is a set number from 0 to 100. It can be raised or lowered, but is not a ticking clock of tiny gradual changes. You will be able to tell immediately what the major causes of the disloyalty are, and will be better able to intervene.

Loyalty may still be modified by game events and effects, but, even if temporary, they will be a fixed number for that time frame.

CHANGES TO THE MAP

The Archimedes update comes with some small changes to the world map, centered on adding more balkanization in India, to better reflect the political situation at the time.

In Northern India, we have new independent states – including Khasa in Kashmir, and the Himalayan kingdoms of Nbahaka and Nabhapakti. The Punjabi plains are now the home of two strong republics – Paurava and Yaudheya – who are subjects of the mighty Mauryan Empire.

Some of the larger states from previous versions of Imperator: Rome have been divided. For example, the island of Lanka is now divided into three states, not unified under Anuradhapura and the inland of southern India is now under various chiefdoms we know from Sangam literature,  including Kosar and Parambu.

The borderland between the Seleucids and the Mauryan Empire is now occupied by Arachosia, a playable satrapy of the Seleucids ruled by Syburtius. The Khyber Pass is now controlled by Gandhara, another Seleucid subject state. 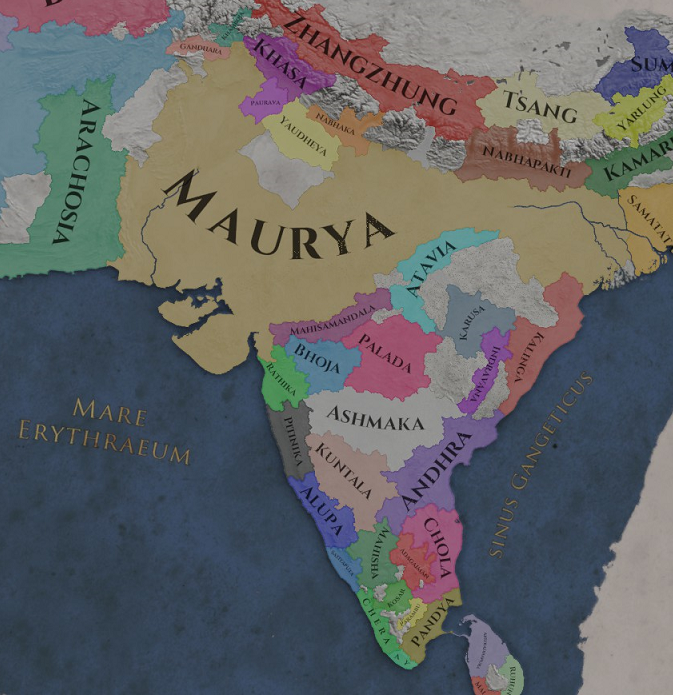 These changes are available in the Magna Graecia content pack, which is for sale separately from Imperator: Rome.