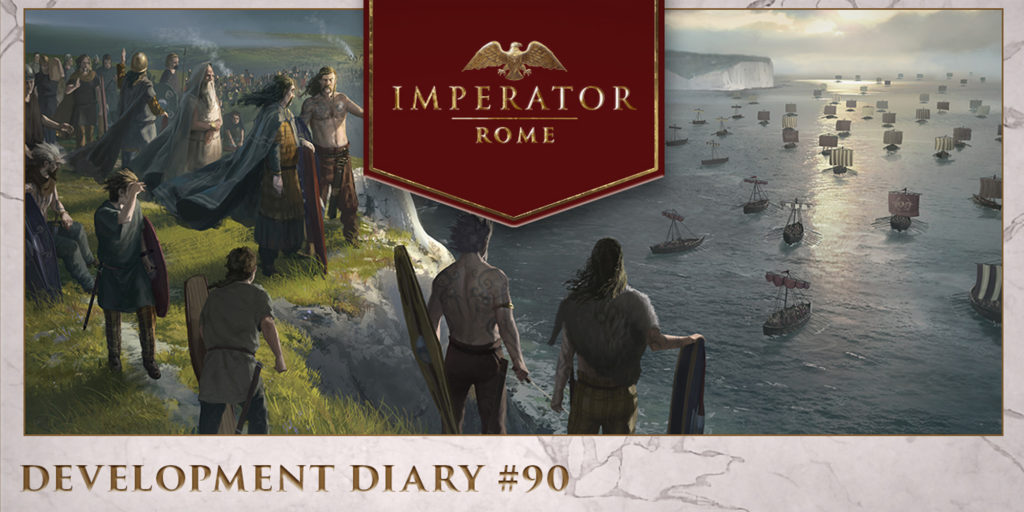 Hello and welcome to another Development Diary for Imperator: Rome and the features of the upcoming Menander update. Today I, Trin Tragula, will be talking about some of the changes we are bringing to cultures and how it interacts with countries, pops and characters.

Before that however I would like to introduce the new Pop Type that the Menander update will bring. 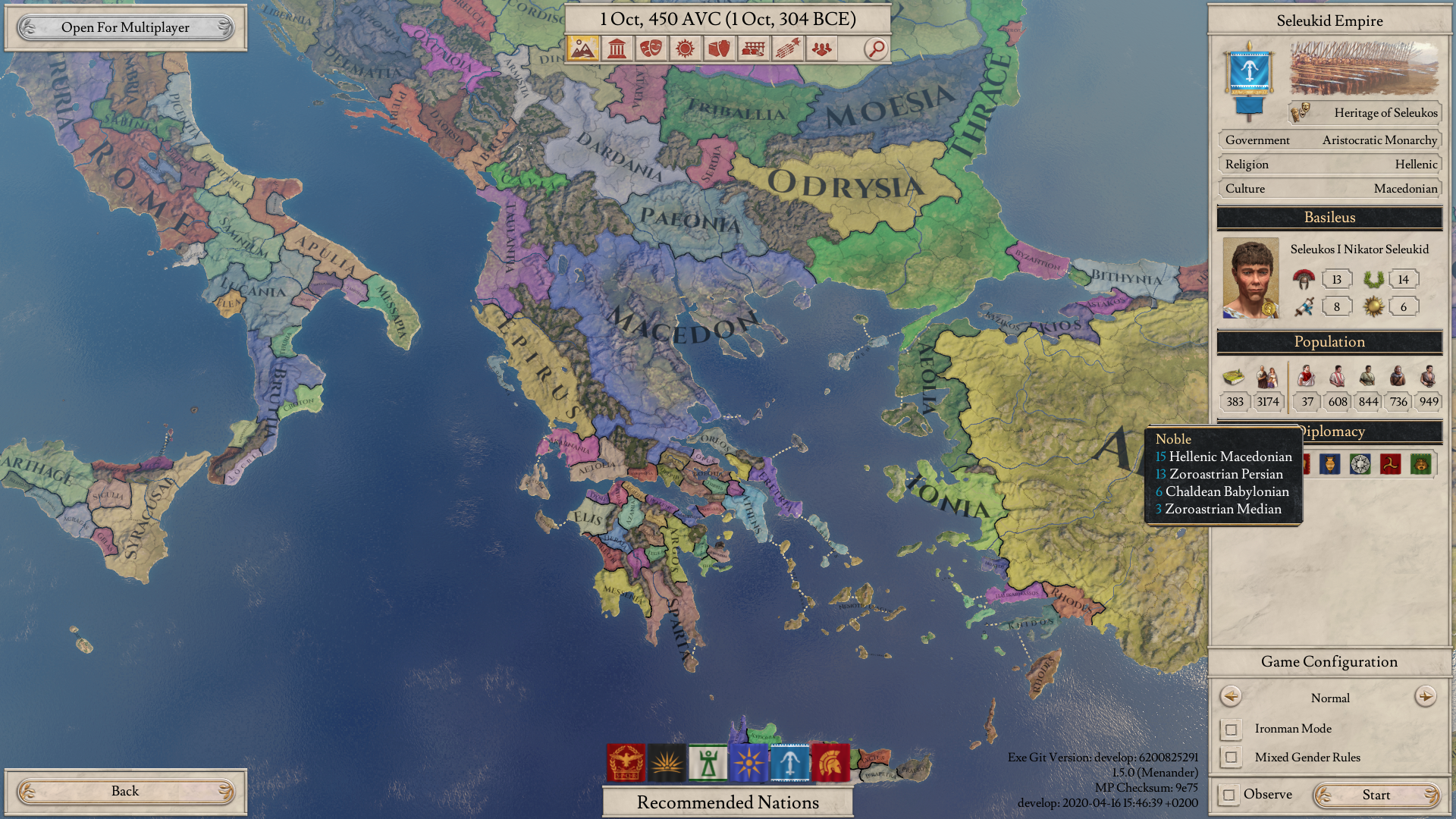 In the Menander Update we will be adding a new Pop Type at the top of the societal hierarchy. In Rome these would be the Patrician class, but Nobles are by no means unique to Roman society.
We will likely expand on what Nobles do in the future but for now each Noble will produce the same amount of Commerce as a great number of Citizens, meaning that if they are happy they could bring in quite a bit of gold.Nobles will however, be very hard to please, with a base pop happiness of -10%, and rare with a base desired ratio of 0 in all territories except country capitals.

The happiness of a Noble pop also impacts unrest much more than that of the other pop types, meaning that you may want to consider importing expensive luxuries like gems or precious metals to keep them happy. The Court building will also now increase the desired ratio and happiness of Nobles. 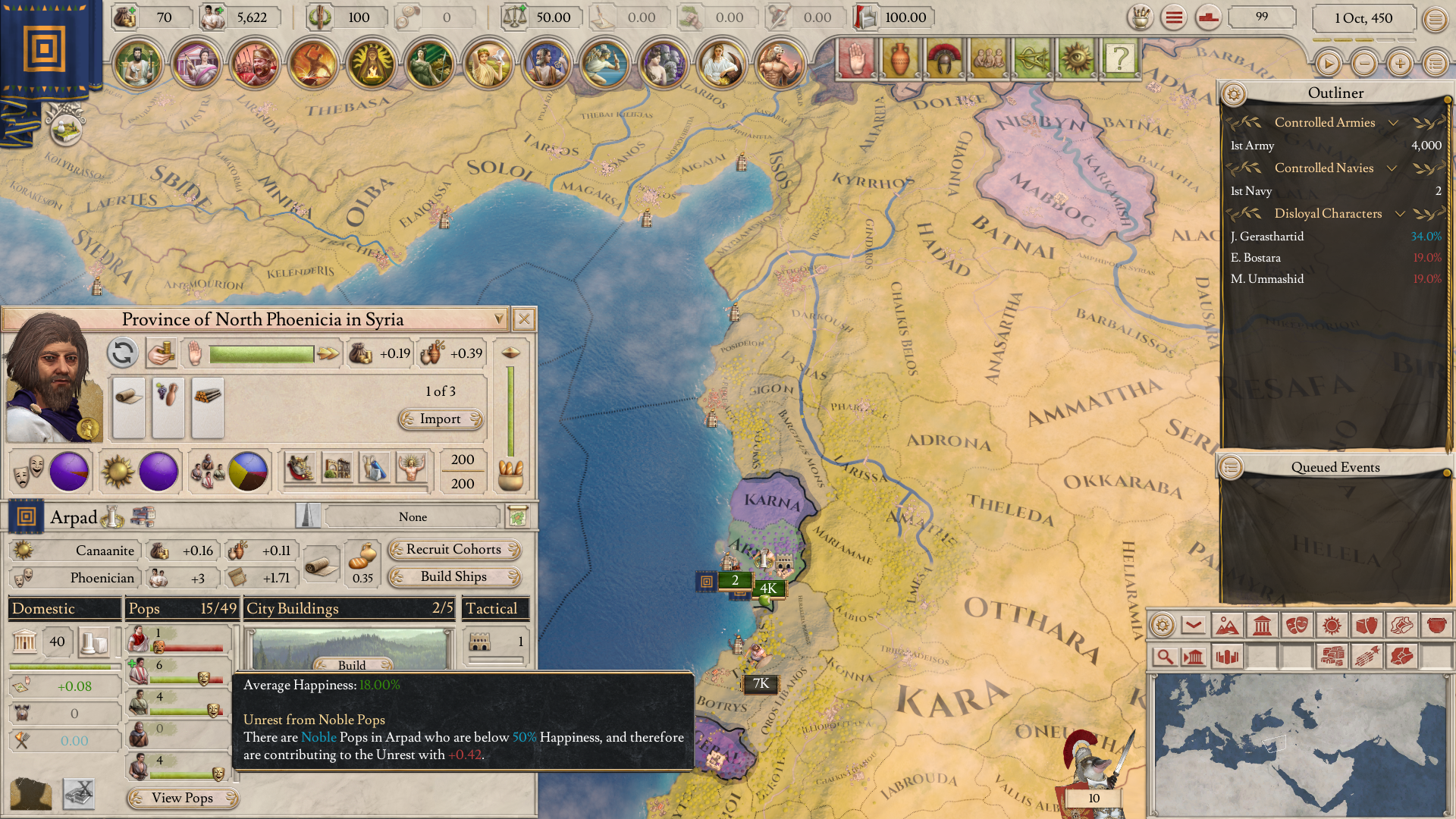 On start not many Nobles exist in the world , the ones that do will be spread out in capitals and to some extent in the former Persian & Argead Empire.

Up until now the only way for a country in Imperator to rule a large and diverse empire has been to culturally assimilate the vast majority of pops under your control. This is in stark contrast to most empires in the real world (perhaps with the notable exception of Rome itself) where multi-ethnic empires where often the norm and instead chose to integrate the various conquered groups into the power structures in their society.

In the Menander update a system for integrating cultures will be added, as well as a system of bestowing Civic rights on the pops of a culture – regulating how high pops of that culture can promote. If civic rights are at ‘Citizen’, or ‘Noble’ level, all pops of that culture will be treated as a part of your own state culture. The price for this in the short term will be destabilizing the state, and the long term cost a permanently lower happiness for all state culture and integrated culture pops. 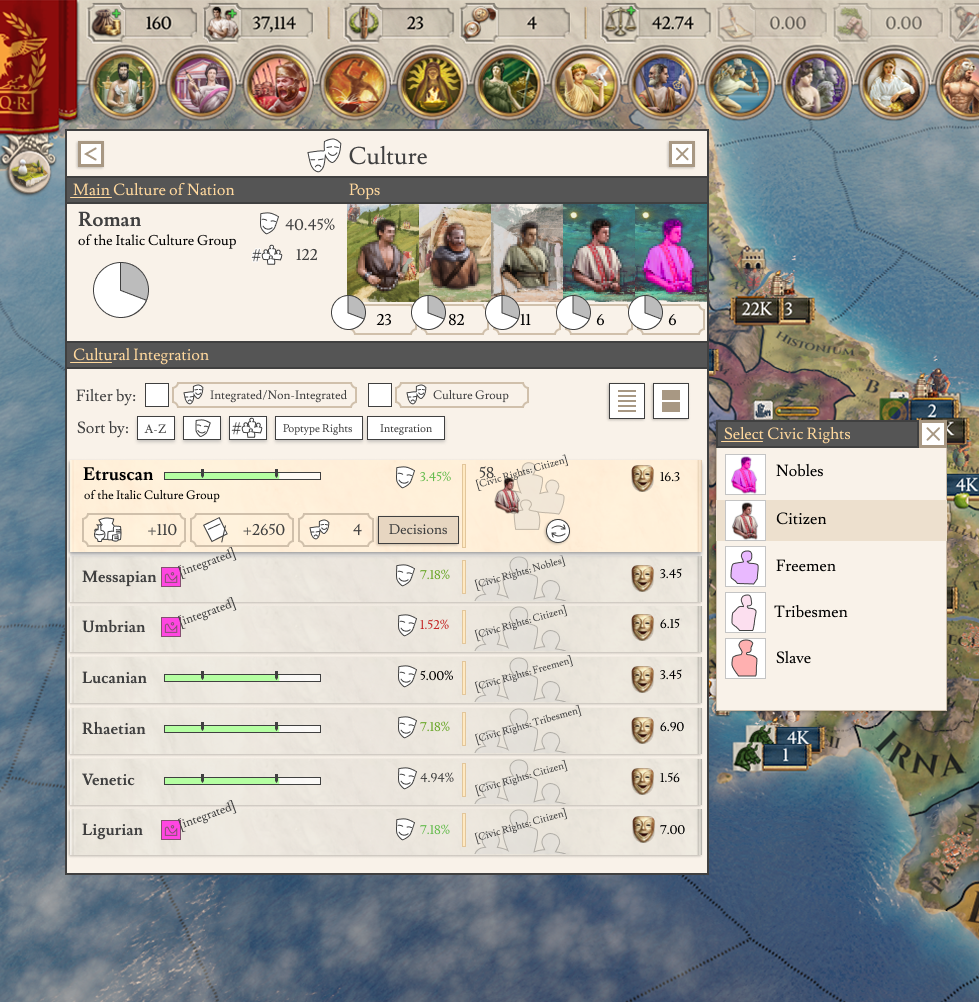 While this feature is in the process of implementation we can still offer this mockup of what we want the future interface to look like.

In the Menander each culture inside your country will have an individual Civic Right set. This right can be set to any of the pop types in the game (Slave, Tribesman, Freeman, Citizen or Noble) and will control the highest level a pop of the given culture is allowed to promote.
Default right (ie the rights of newly acquired cultures) will start set at freemen level but can be set to either Freemen, Slaves or Tribesmen by the player. Existing pops that are above their allowed status will in time demote to the highest pop type allowed for their culture.

Changing civic rights of a culture will have a one time cost of Political Influence but more importantly it will impact the Cultural Happiness of that culture.

Together with the re-imagining of Integrated Cultures in the Archimedes update we will remove the concept of blanket wrong culture happiness and wrong culture group happiness.

Instead, every country will have a happiness value for each culture in the game, and will have to manage the happiness of its subjects as a group.

Cultural Happiness will start out similar to the old system but over time through your actions these this will change on an individual culture basis, and will also be affected by the Civic Right that a culture is given in your country.

While you will be able to interact with the happiness of the cultures in your country through events and by granting them privileges through decisions and the like the most significant impact on cultural happiness will be the Civic Rights of a culture both in itself, as pops promote or demote (since pops have different base happiness ratings) but also as the pops and characters of the culture as a whole reacts to the rights it is given (or has taken away).

Integrated Cultures
Cultural Happiness is not the only thing in the Menander update that will regulate the happiness of the cultures in your country. The game will also make a distinction between those cultures that are “integrated” and those that are not.

An Integrated culture is a culture that has the civic rights to promote to Citizens or Nobles, this makes that culture part of the elite in your country.

Each integrated culture will reduce the State Culture Happiness by 5% and exempt all Pops of that culture from cultural assimilation completely.

Since they are considered part of your State Culture, Pops from Integrated Cultures will also get the Happiness modifier that your State Culture pops get – this means that for each culture you integrate you dilute the extra happiness that your state culture enjoys.

Gaining new Integrated Cultures
In order for a culture to be granted Citizen or Noble Rights it needs to first make up a sizable part of the total population in your country. Unlike the effect of changing civic rights for a culture normally integration is not instant. Instead progress will build up over time (with the total time being dependent on the number of pops in your country of the culture) and as long as integration is in progress you will suffer a negative stability penalty.

On the road to integration you will also run into events that pose you with choices relating to the integration of the new culture. You could be asked to take in a new Great family from this culture, to adopt one of their deities, or to make concessions of some sort.

Integrated cultures can also be lost – at a very high cost to cultural happiness.

Related Changes
In order to accommodate the changes we are doing to how happiness works in regards to cultures we will be making some related changes. Base assimilation of culture will be reduced sharply (similar to how we did the same for religious conversion in the Archimedes update), and we will also be splitting up some cultures and culture groups in the world.

These are the biggest changes to the culture setup in the update:

The Celtic culture group has been broken into a Gallic and a Panonian group. 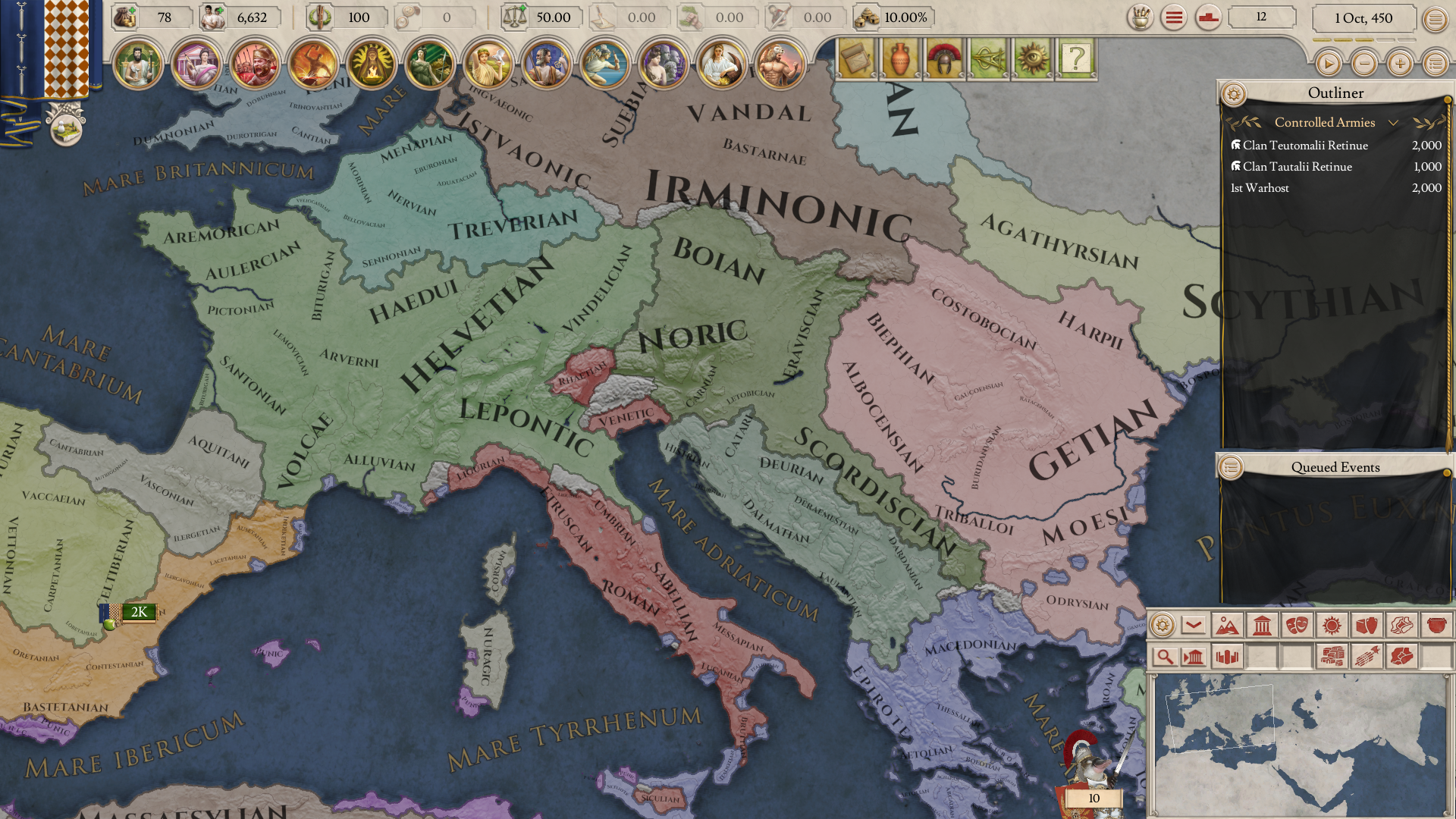 Persian Culture Group will be split into 3 new groups: Iranian, Anatolian and Caucasian. 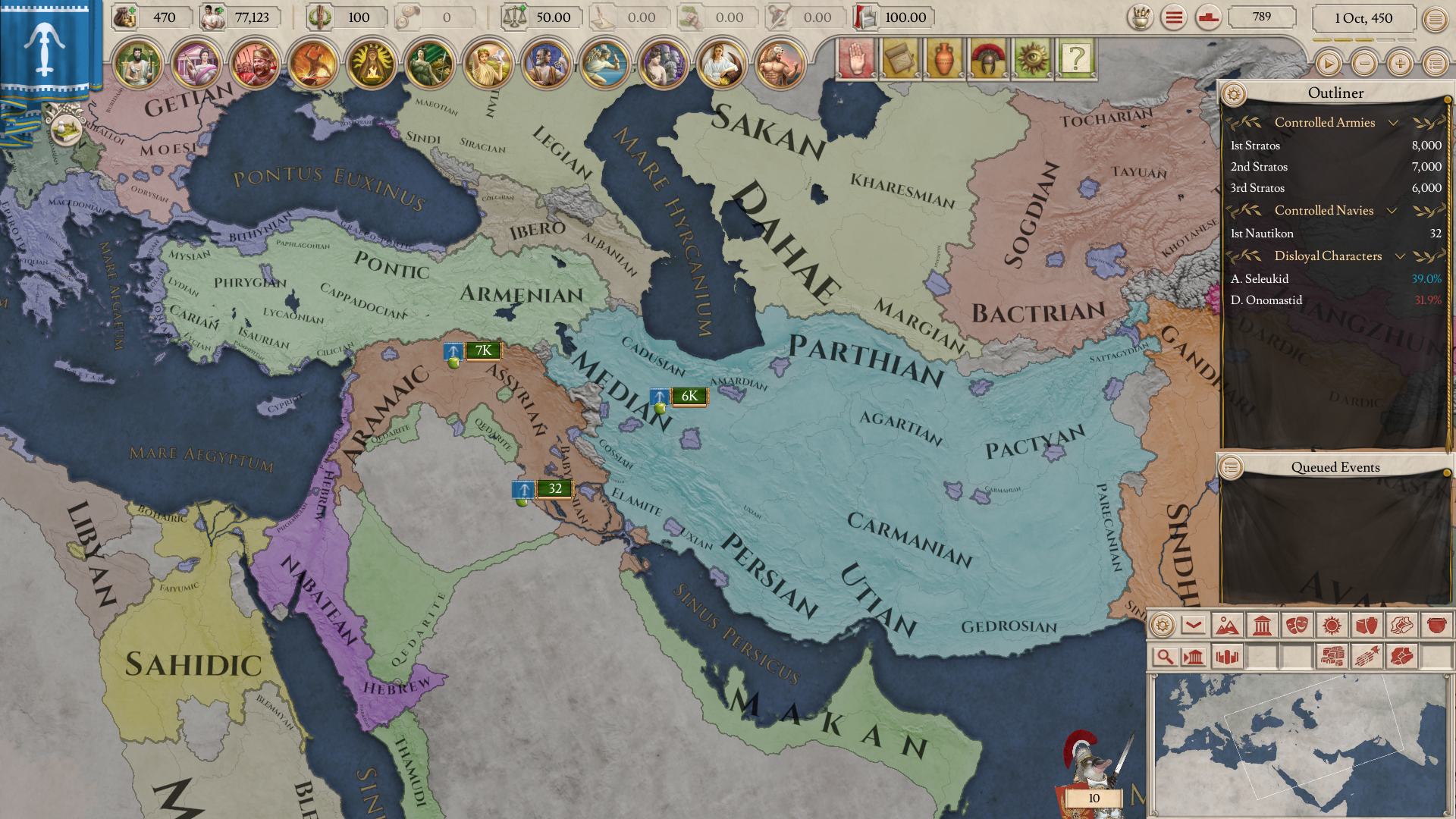 The Nilotic Culture Group has been renamed to Egyptian, with 3 subcultures in it. 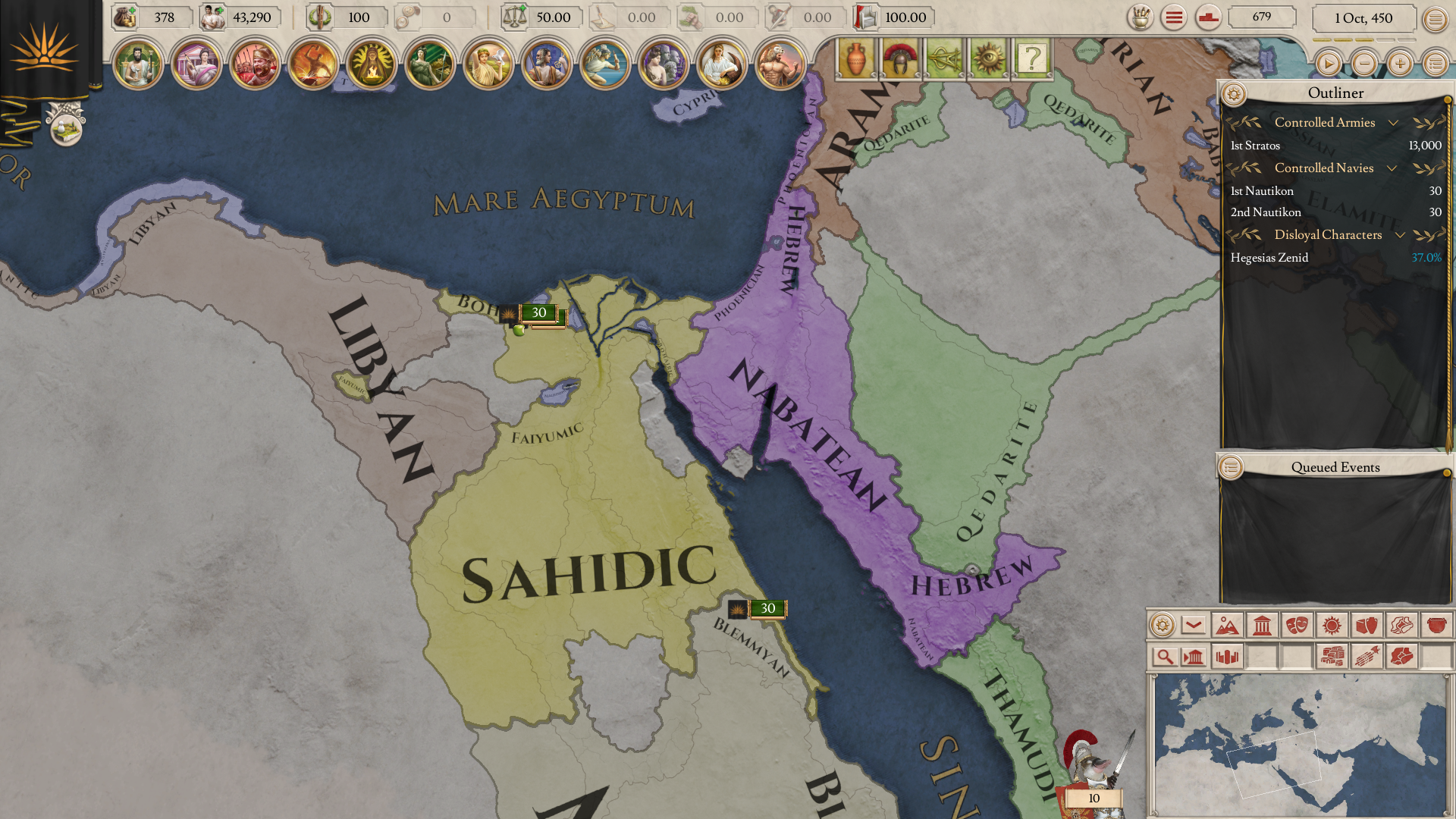 Scythian culture has been split up. 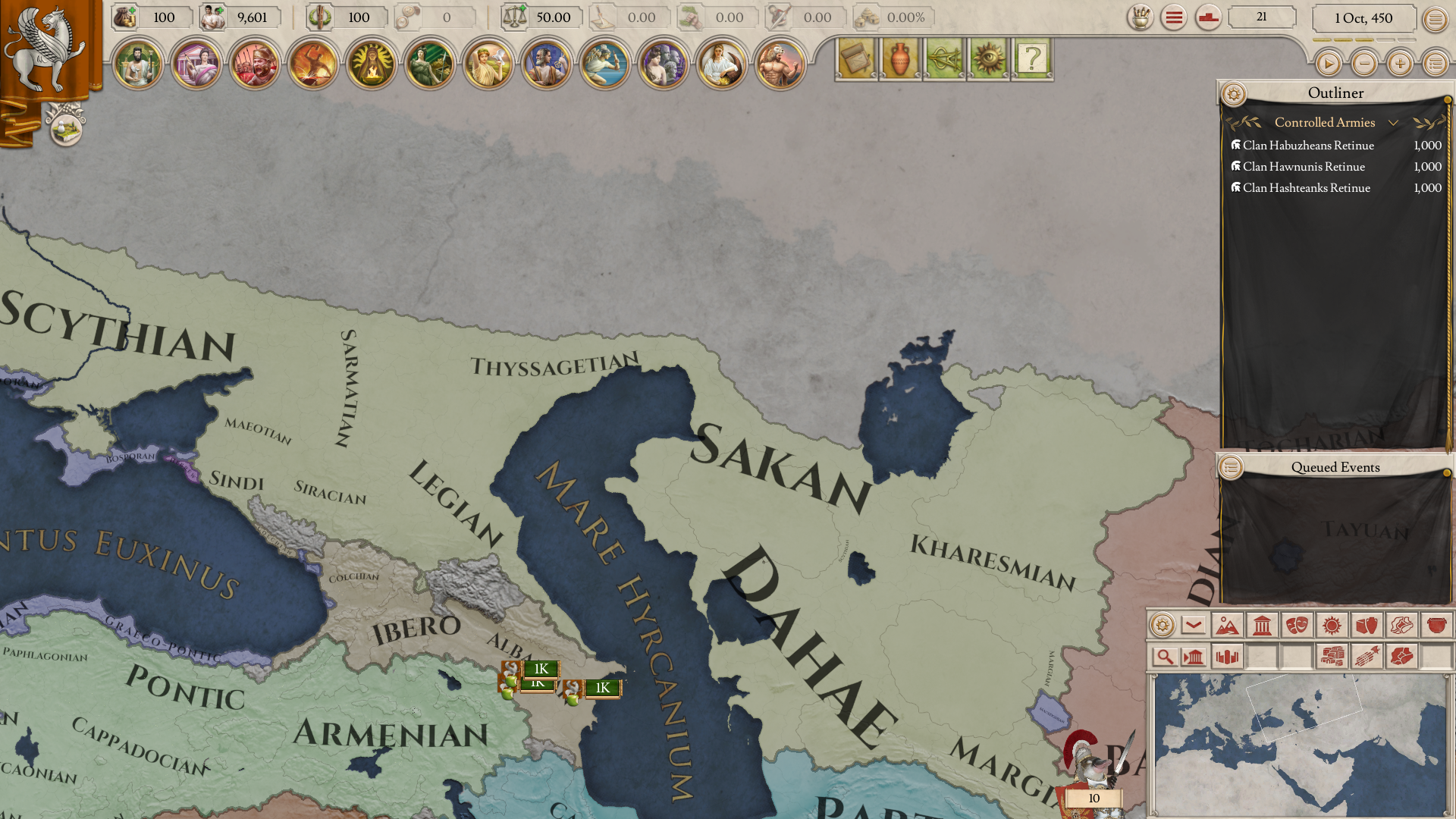 Lastly a new Pracyan group has been broken out of the eastern part of the Aryan culture group in India based around the countries using the eastern indo-aryan court dialects. A new Atavi culture has also been added for the tribal peoples in the east-central inland. 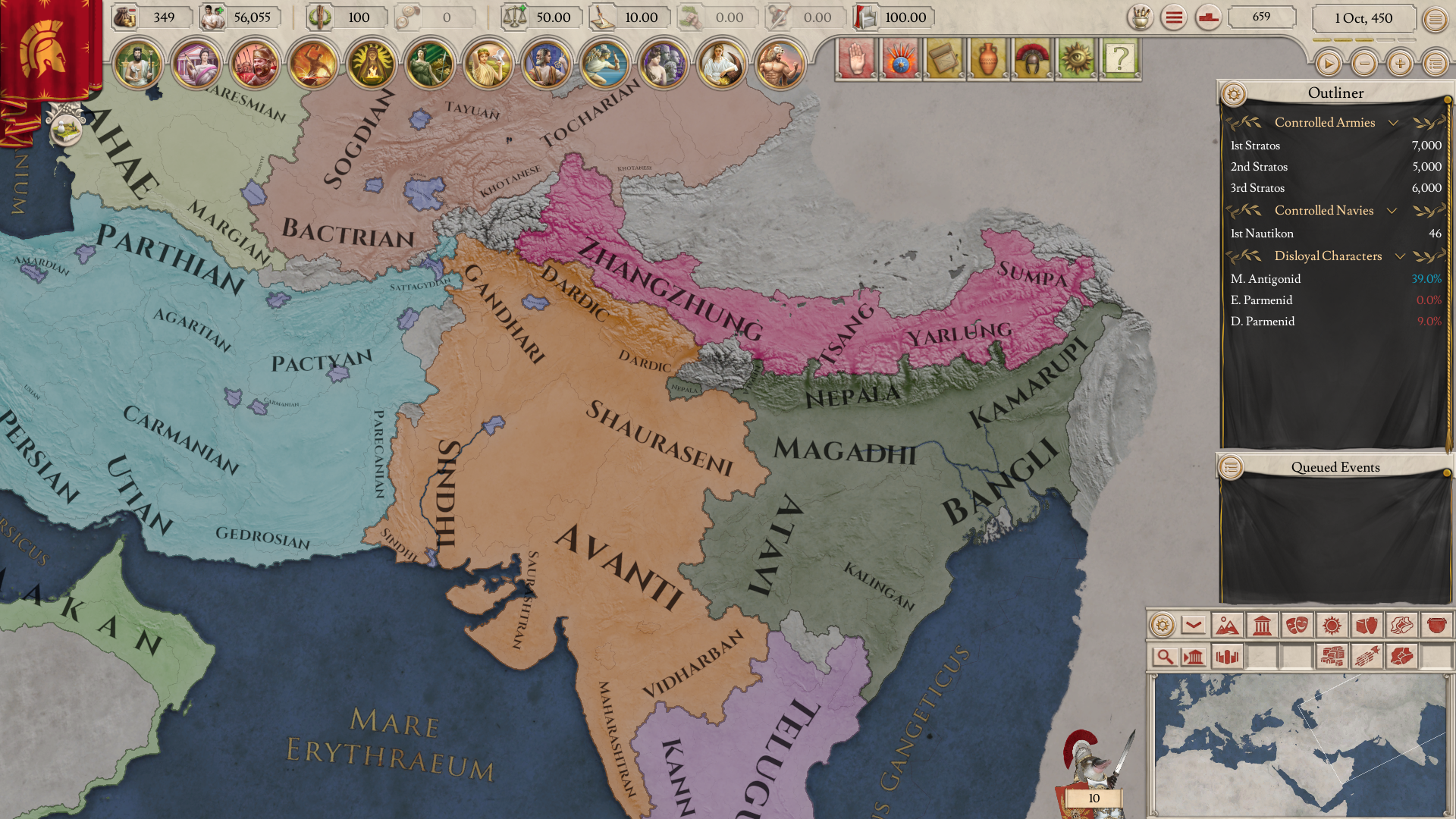 That was all for today. We hope that these changes taken together will let you interact with the people of your country in a more interesting and believable way, and that the Menander update will bring an end to the rule that all great empires must be mono-cultural ones in Imperator. This is however just the first of the diaries on this new update, more will follow in the coming weeks.