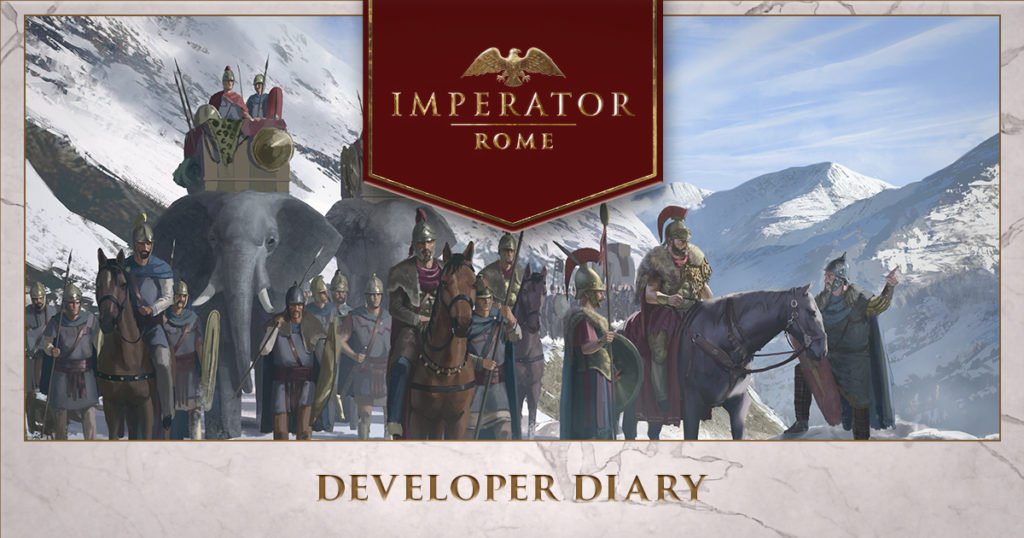 Welcome to another development Diary for Imperator: Rome, and the 2.0 Marius Update.
Today me and @Braindrift will be talking about some changes coming to the Invention system 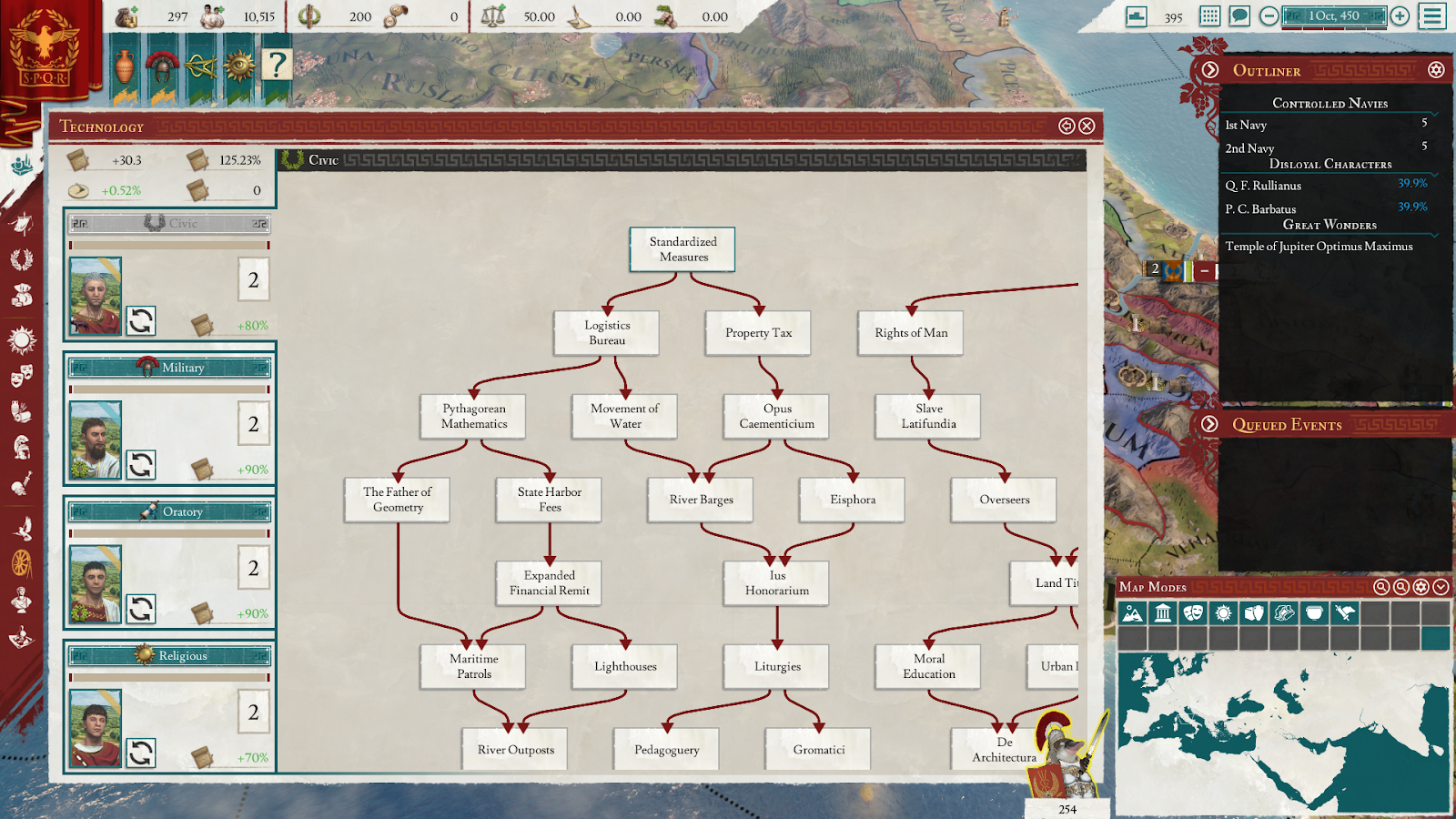 Up until now the invention system has been fairly uninvolved, with new inventions arriving at every tech level, and the selection of inventions you can implement severely limited at any time.
The idea behind this system was that while technology progresses you do not get more than base benefits from this unless you also invest in the implementation of the various inventions that each level was associated with.
This system has also changed very little (beyond how the price for inventions is scaled) between the various versions of the game since release.

In the Marius update the plan is to replace the Invention system.
Inventions are to remain to some extent gated by tech, but more importantly inventions are now in a tree-structure, allowing you to choose in which direction you want to progress, planning ahead for what you want your country to be good at. If you want to be a naval power you can progress down the naval portion of the military tree, perhaps even focusing on what type of ships you want to improve (lights over mediums?), while an expansionist might want to go after the inventions that help in absorbing lands with reduced penalties.

This change also allows us to pace some of the benefits in the trees in a better way than the old system where you would only ever have 3 inventions of each kind available at any time.
Additionally the new system will support country or culture specific branches, and will have new inventions added to better allow you to customize your country, interacting with Laws, Great Wonders, and more

@Braindrift has been working on making the new trees, and adapting our old inventions to them as well. I will now leave the word to him to explain the thoughts behind the trees. As with all things we show in our Development Diaries these trees are still work in progress 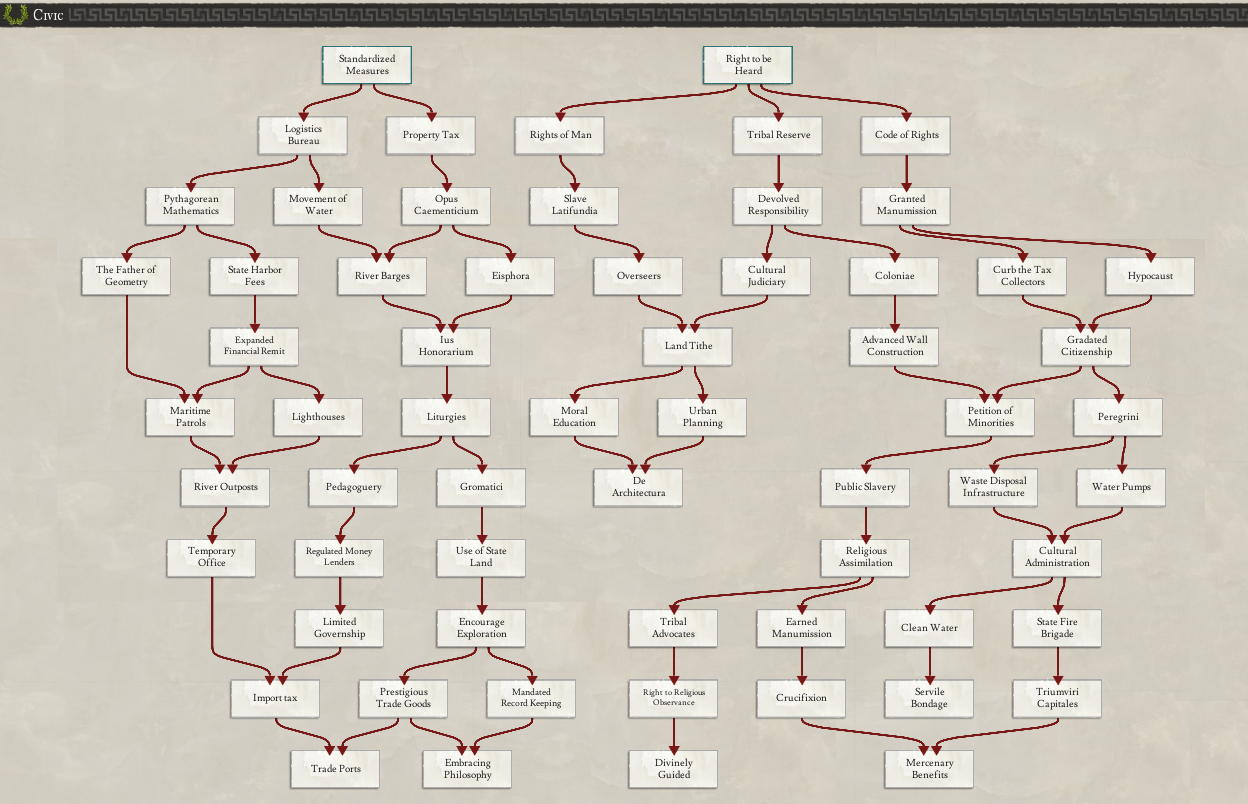 The Civic Tree has been split up into two paths. The path to the left, starting with Standardized Measures, focuses on trade, commerce and provincial infrastructure. The path to the right is more oriented around civil rights, laws and cultural ideas around population, giving you improved output from slaves and freemen and improvement to happiness for cultural groups.

In the Military Tech Tree, you will find three main paths, each focusing on a specific area with the thought that it will make it easier to specialize. In the left-hand tree, you’ll find most things related to naval warfare and ships. The middle tree is oriented around military culture and logistics, mostly with improvements around your land-armies and the organisation around them. The right tree focuses on inventions and war-machines that empowers your siege abilities as well as fort defense. 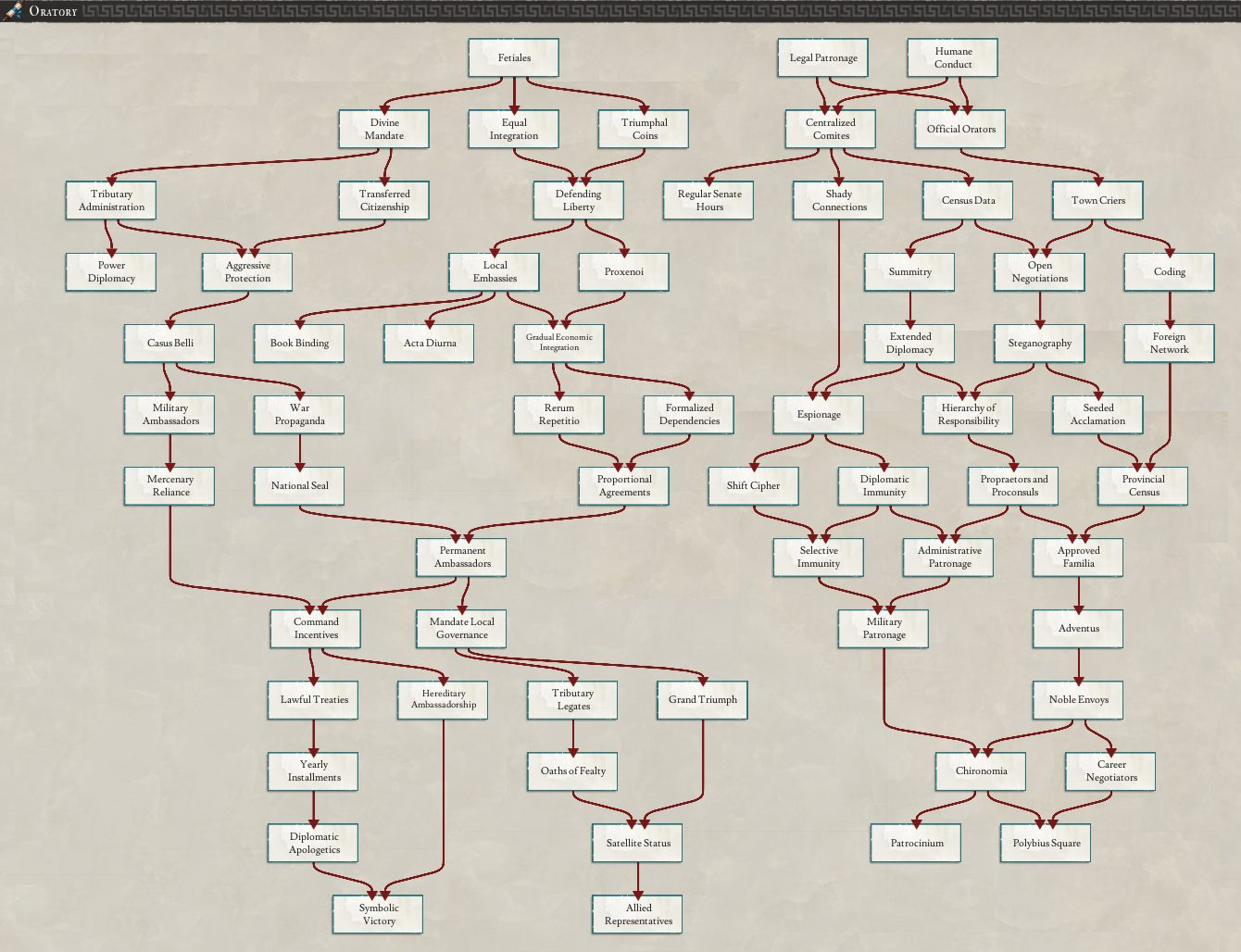 The Oratory tree has two paths which roughly can be described as foreign and domestic affairs, or perhaps the Conqueror and Diplomacy path. The left tree is oriented around inventions that give you reduced War Score costs and lowered Aggressive Expansion impacts, but also increased loyalty and income from your subject states. The left tree focuses more on the internal affairs and diplomatic relations of your country, with a series of inventions that can increase the loyalty of characters within your nation and lowering corruption and tyranny. 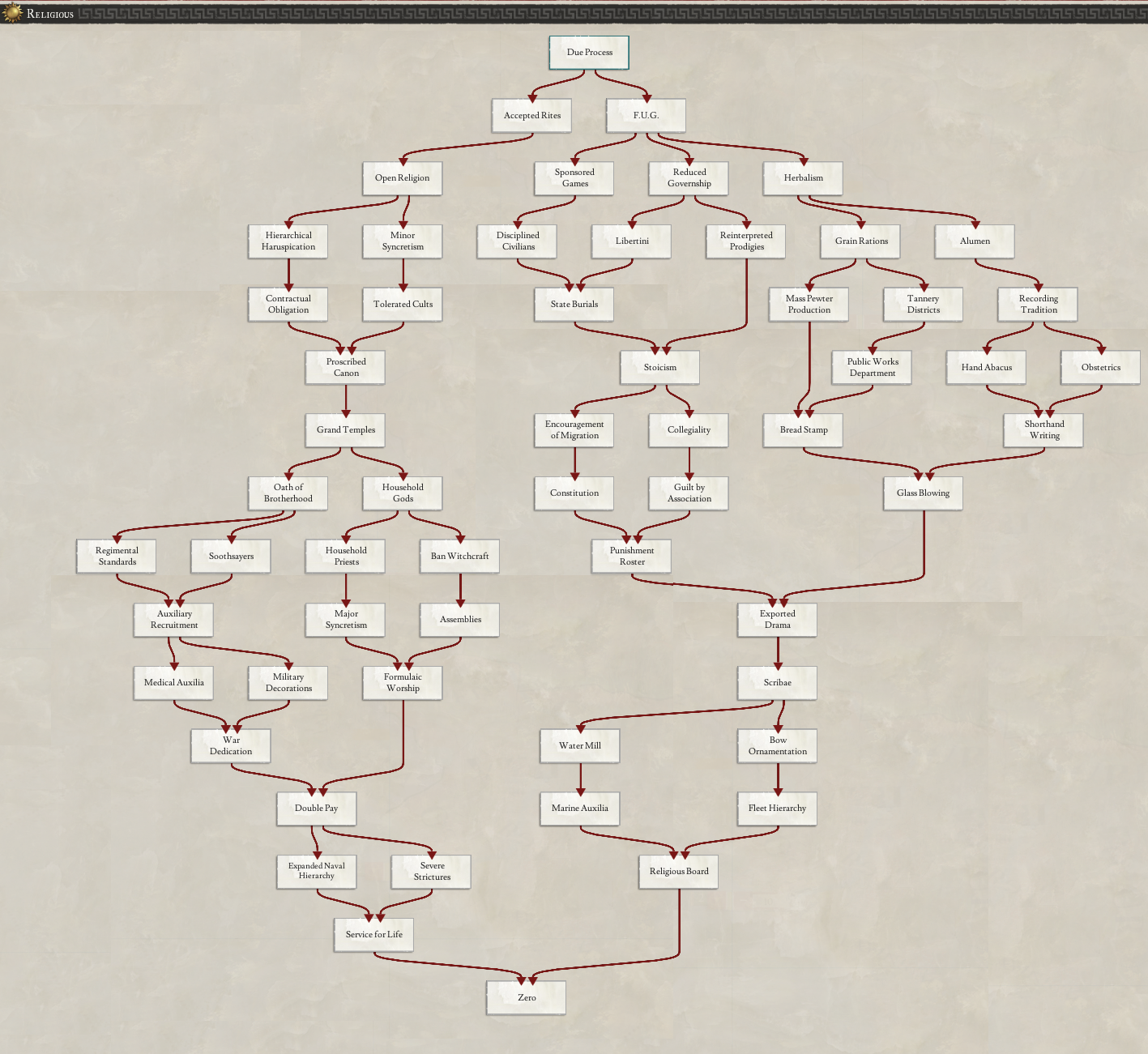 The Religious inventions are organised into one big tree, but similar to the others, the paths will have different themes. The leftmost path is oriented around religious culture for both the civic and military area, where you’ll find inventions such as; Tolerated Cults and Household Priests that will lower the cost for Divine Sacrifices, or Oath of Brotherhood and Military Decorations which will give you improved morale recovery for your armies. The middle path tries to capture the relation between state and religion, while the right path orients itself around inventions that come from the religious field.

Most inventions will still focus on making your country slightly better at something, modifiers to things like the strength of certain units, to population happiness for specific pop types, how good your country is at demanding land in wars, etc.
The new system does however also support direct effects from inventions, or locking actions, laws, unit abilities, etc, behind them. Instead of the implementation of a certain invention just getting you a better ship type it might also get you a better port, or a new ship.
To some extent this relates to features that we have yet to talk about, so there isn’t too much to show here yet.

Unlocking Inventions – Progressing in the Trees​

One other thing we want to revisit in the Marius Update is how you unlock inventions. For now the main way to do so will remain a gold cost, scaled on the number of pops in your country (the idea being that implementation of an invention is more costly the larger your country is), but this has in the past created situations very large countries really cannot afford to prioritize inventions.
The economy is changing a fair bit in the new update so we will await how the old costs play in the new system before we make any adjustments to this cost.

One new thing we are introducing to make things more interesting, however, is “innovations”. Innovations are essentially free unlocks in an invention tree that you get every time you gain a tech level.
Innovations represent important, milestone unlocks, adopted as part of the cultural zeitgeist of your nation, and allow you to progress over time in the trees of inventions in your desired direction, without diverting the funds from other areas.

Innovations may also be gained from some other sources (but technological progress will be the main source of them throughout the game).

That was all from us this week, except that Arheo has now hijacked the dev diary to leave you with another teaser…