Dev Diary #101: A Most Auspicious Number 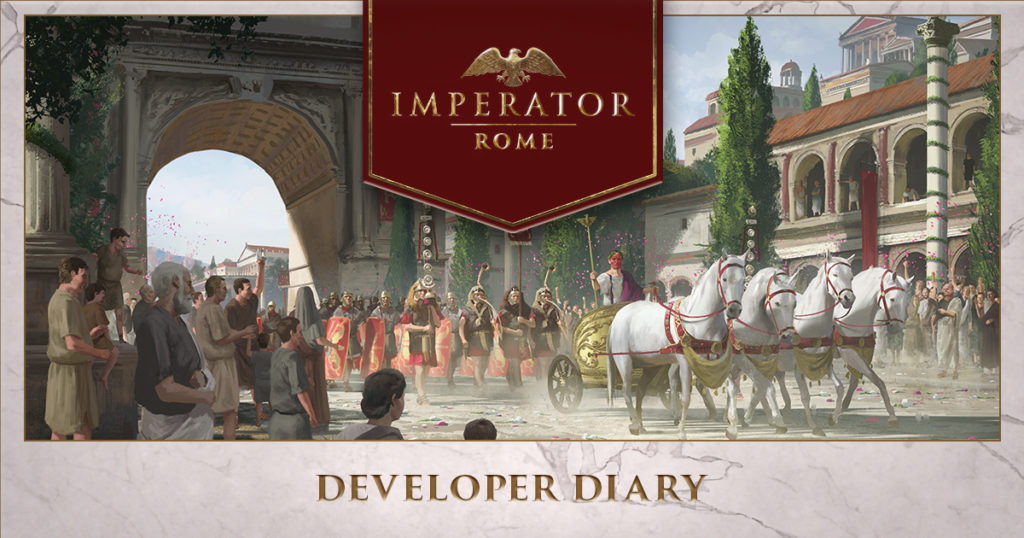 It’s been a while since you heard from me or the Sthlm team, so I’m here to do a few things today.

Firstly, there’s a few points of confusion to clear up!

The team down at Thalassic began working on Imperator early this year, onboarding and getting accustomed to the game and the codebase – their first feature (Great Wonders) was created in parallel while the Stockholm team produced the 1.5 update which is currently in your hands. This has worked very nicely, however, having two studios working on parallel tracks makes it difficult to produce the kind of interconnected material that makes Imperator unique. Over the last several months, we’ve begun integrating and onboarding the talented folks at Thalassic into our workflow in order to enable the production of more integrated features and content which you’ll discover very shortly.

Our last dev diaries were intended to give Thalassic a platform to show off what they’ve created, without flipping back and forth between the two teams.

Following on from this, I’d like to clarify that the next update you will receive will contain, but not be limited to, the Vitruvius update. Working with a second studio is quite new for us, and we wanted the Great Wonders feature and update to have a unique codename; in this case, it is not tied to a specific and limited release. In this case, it will be released alongside our next major update.

The last point of order I have here comes with a side-note: namely, that you’ll be waiting a little longer than usual for the next content update for Imperator.

Well, this was hinted at a little when the ‘unprecedented’ scope of the upcoming release was mentioned in the last dev diary. The scope and quantity of features coming in the next release is of such gravitas that we are changing the version number to adequately portray what this represents for Imperator.

As such; I can now introduce the 2.0 Marius update.

Well, no. I don’t think so. At this stage I can only commit to a broad overview of some of the things we intend to cover with this update, though I would urge you to make up your own minds after reading the following:

My overarching directives for 2.0 are pacing, warfare, and UX.

I want to achieve a more consistent and choice-based progression to the flow of the game. As of right now, much of what the game offers you is available to you from the very beginning, and there are fewer ways to customise your playstyle than I would like. We’ll be looking at overhauling the inventions system and the military traditions system in order to effect a more intuitive system of progression that allows for a sense of advancement and identity to develop over the course of a game.

This doesn’t solely mean gating existing mechanics, however, this will also tie strongly to new features and additions coming in 2.0.

This is a pretty big one. I’ve never been happy with the military recruitment and army mechanics being almost entirely divorced from historical reality and being largely set apart from the many other systems in our game. Our main military focus for 2.0 will be on tying the recruitment system(s!) into the rest of our simulation, as well as adding a much larger recognition for the cultural diversity of military forces in different parts of the map.

Several astute forum users have noticed that we’re going to be removing the Raise Levies unit ability. I’ll leave you to ponder over how that might be related.

There are of course many additional improvements coming to the warfare aspect of the game, from forts and sieges, to wargoals and cohorts.

Aaand then there’s this. This is something we’ve been keeping under wraps for a while now, and which has been the sole focus of @jiroro, our UX designer, since she joined the team.

Many of you have expressed a desire for work on the UI, and this is something we’ve heard.

In the Marius update, we’ll be focusing on greatly improving the user experience on an interface level, as well as including a completely new art style. Since it’ll be entirely impossible to avoid showing any features off without teasing at the UI rework, here are some in-progress shots of the state of things on our highly experimental branches.

The bright visual identity of Imperator was tied to too many periphery elements (branding, key art) to change at this stage; it’s something we intend to work with and refine going forwards – we’ll be preserving this lighter style, in contrast to some our sister titles such as Crusader Kings, which opted for a darker approach. I wanted a bold style, dropping a lot of the unnecessary cornels and border decorations that took up a significant quantity of screen real estate. You’ll notice we still have decoration; this is used more carefully, and serves a purpose of its own – to draw attention or indicate the relative importance of an interface, or to create a feeling of immersion with pictures and scenes.

A significant directive I’ve pressed home, is to bring out the importance of characters; no more beige backgrounds, more breathing room, additional usability functions (character search, anyone?), and a suite of backgrounds intended to give characters a little more life.

Part of the behind-the-scenes advantages of this overhaul is also to support easier modding, color switching, and the potential for culturally thematic UI themes (though with the scope of 2.0, it should be said that we will not be adding any of this in the immediate future).

It is incredibly important that you are aware that the art and UX overhaul is not complete, and even things which look overhauled or reskinned may well not yet be finished.

Nb: All screenshots are provided at our minimum supported resolution of 1920×1080. 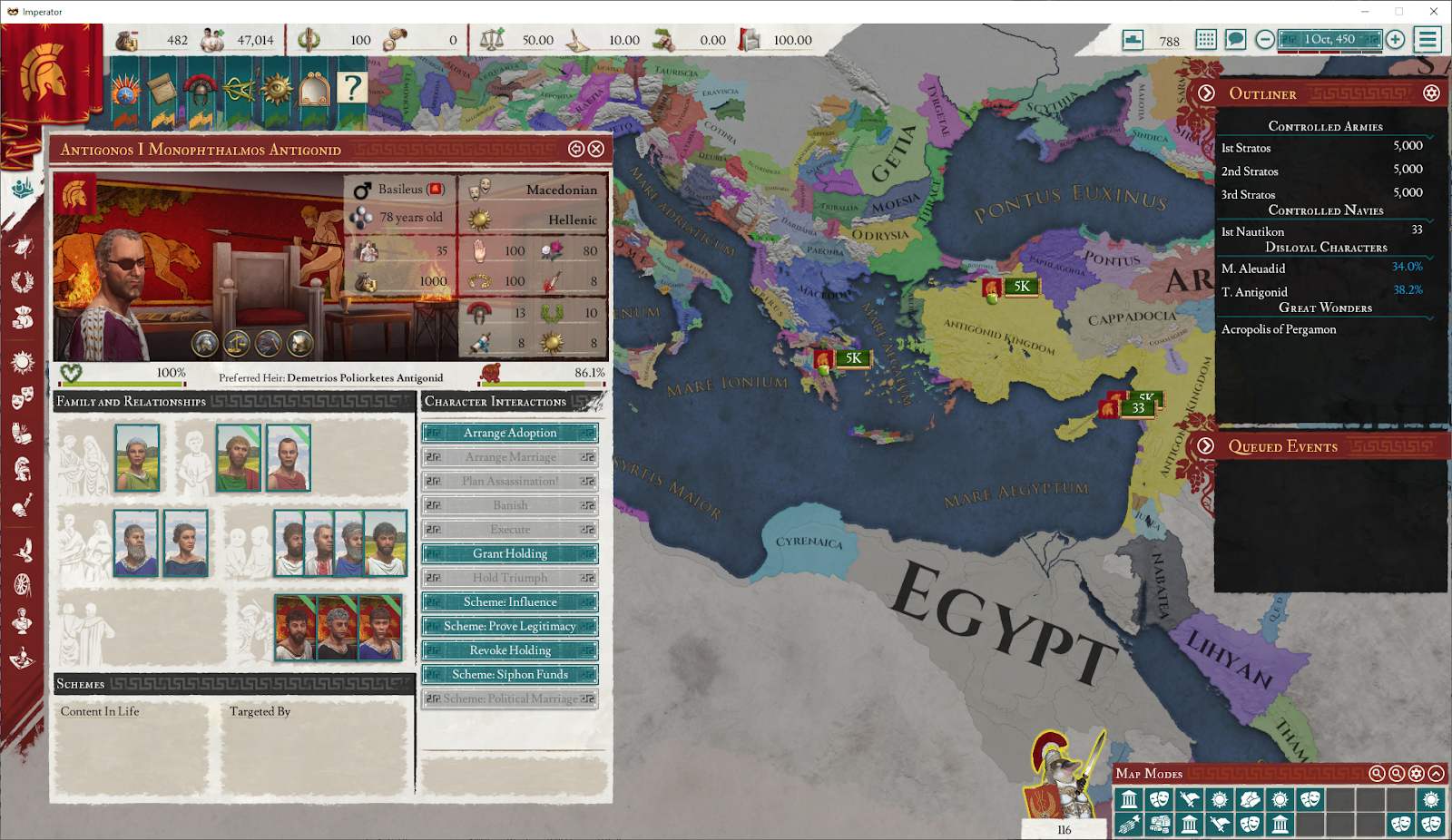 The WIP Character Window. This is one of our larger standard windows in the new UI – we wanted to give characters a great deal more space and personality by doing away with the beige backgrounds, and inserting a more immersive background selection system. Here you can also see that the top bar has been moved to the side, to accommodate more usable screen real estate.

Future plans, inspired by some of the popular user mods (such as the Better UI mod by Agamidae) are to include balance indicators on top bar resources, as well as showing additional contextual information in the top bar. 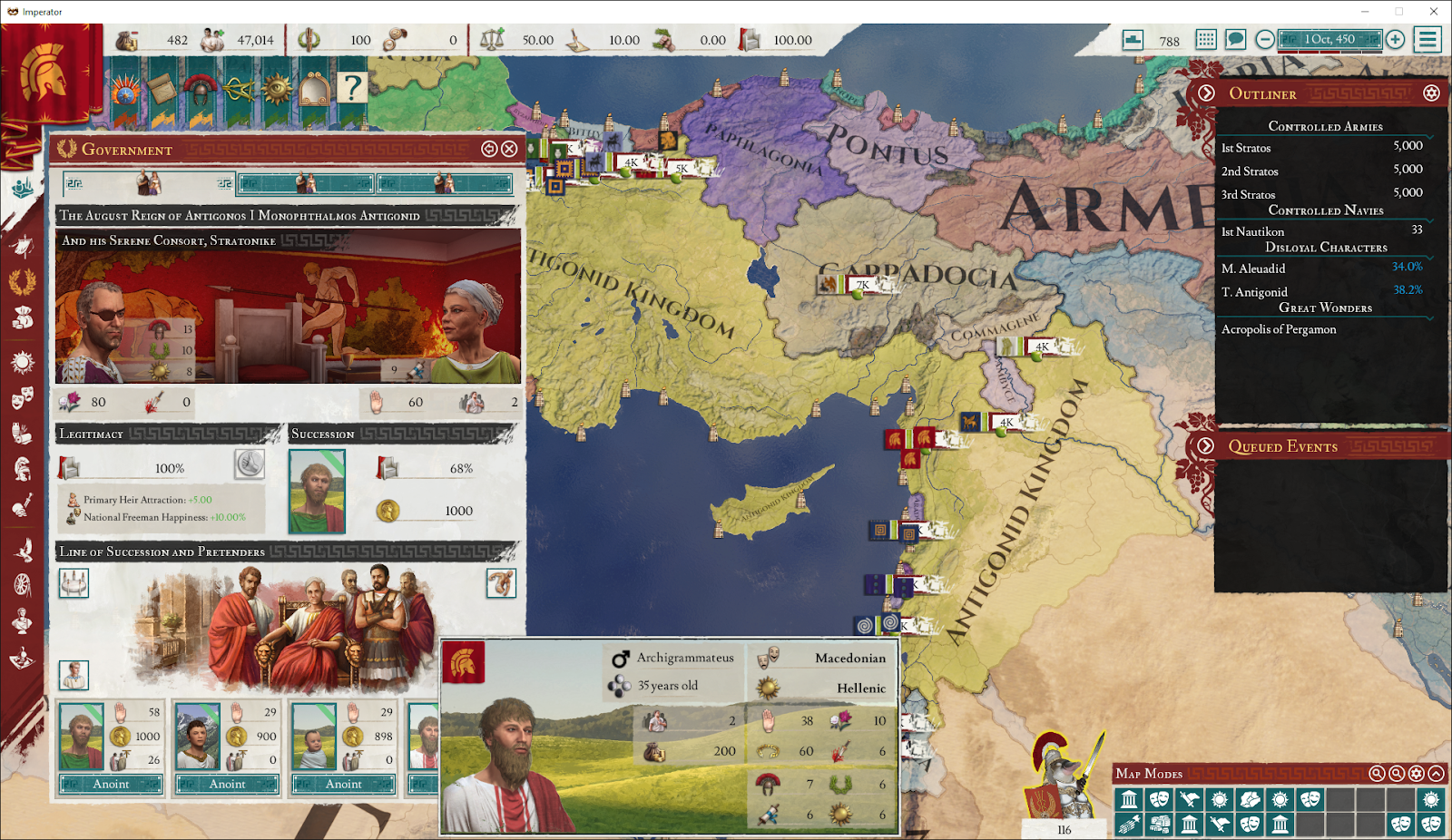 While function definitely takes precedence over form, it became apparent that we had much more space to work with in our newer style; including larger set pieces adds a lot to the feeling of immersion when using the UI. The astute amongst you will notice that we have a new tooltip system – the recent release of CK3 has enabled us to make use of much more intuitive nested tooltip technology. 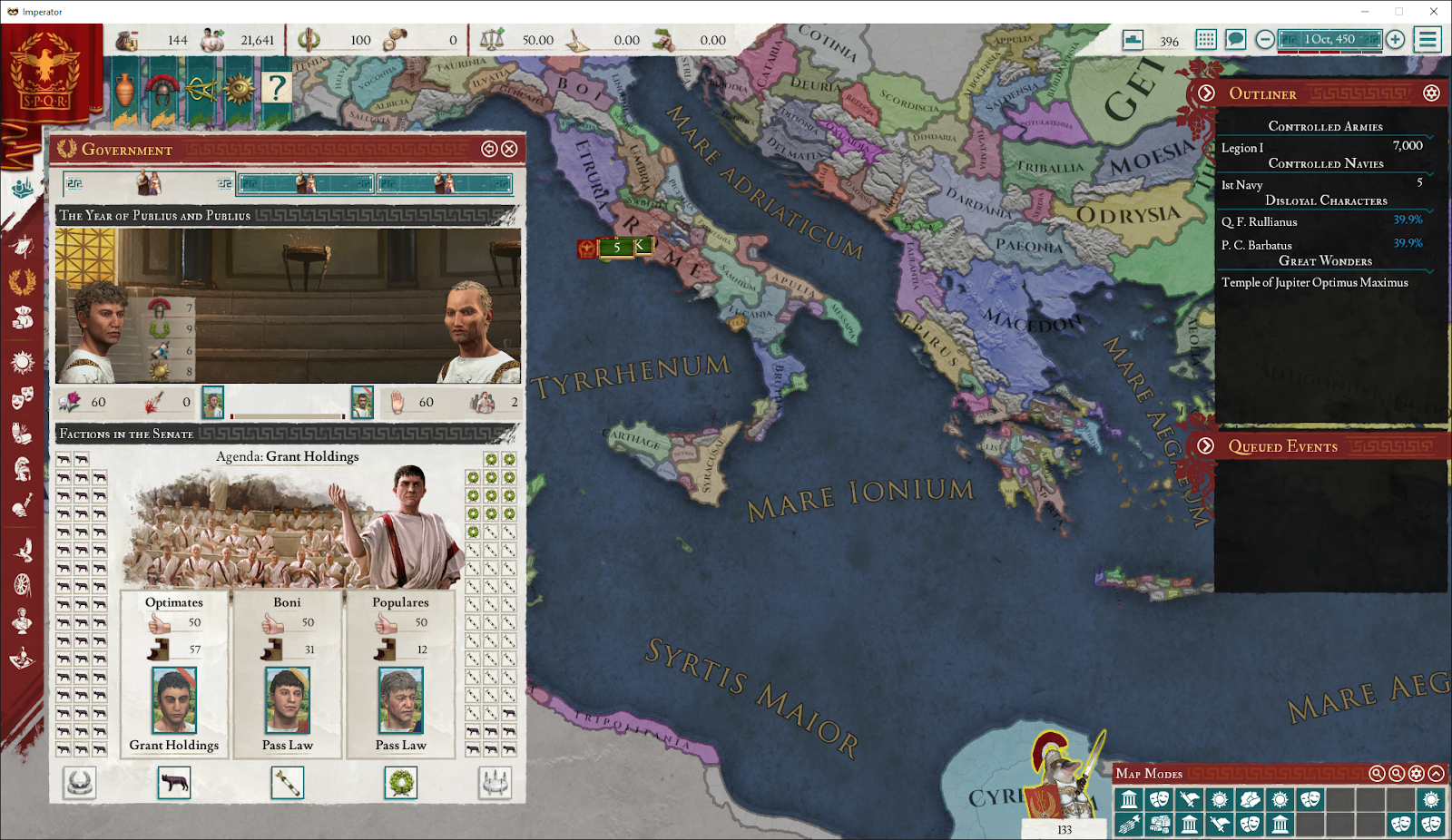 I couldn’t resist the opportunity to make the senate feel more alive. 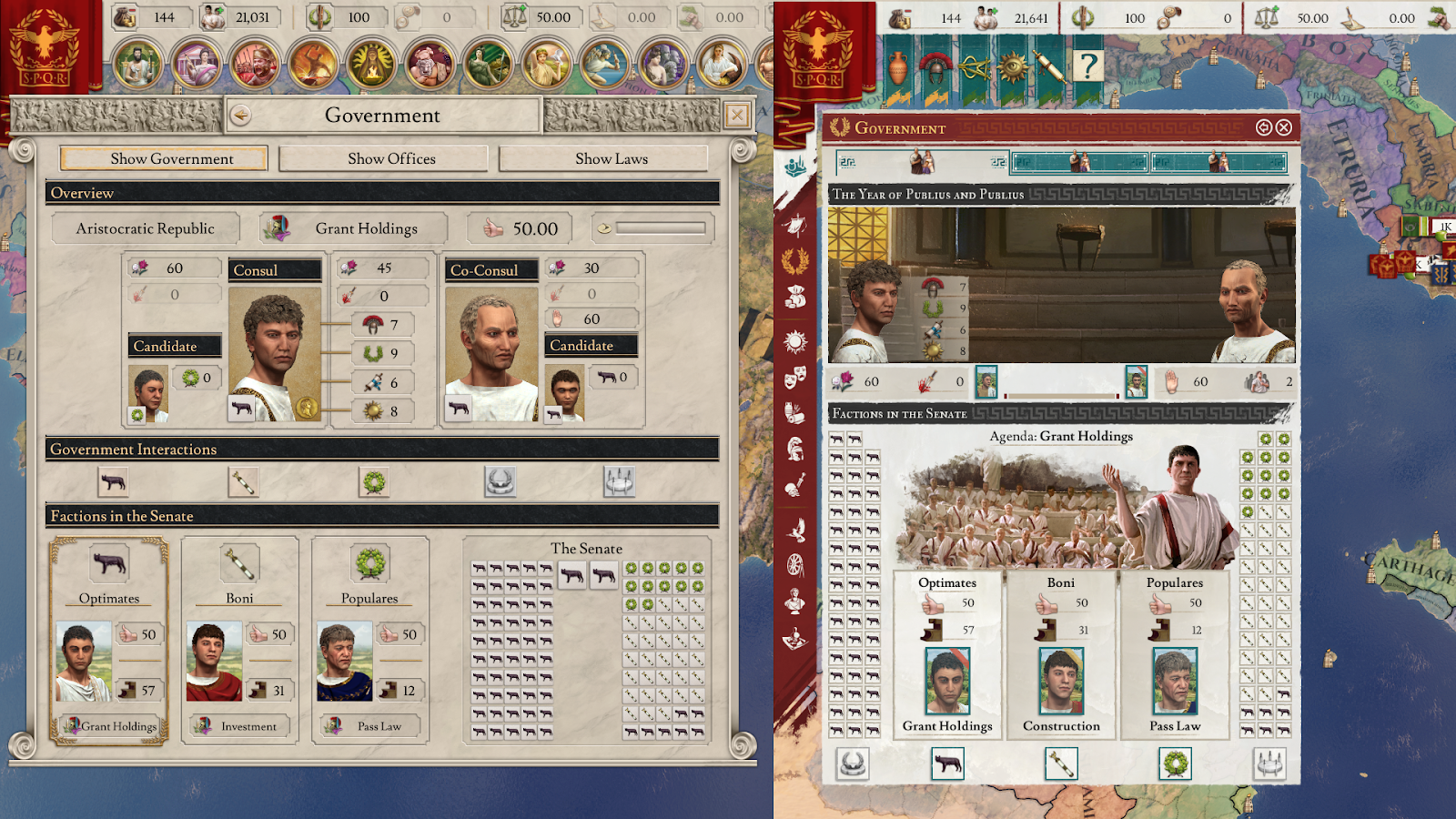 As you can see, we’re working a lot to reduce the size and visual clutter of game interfaces. 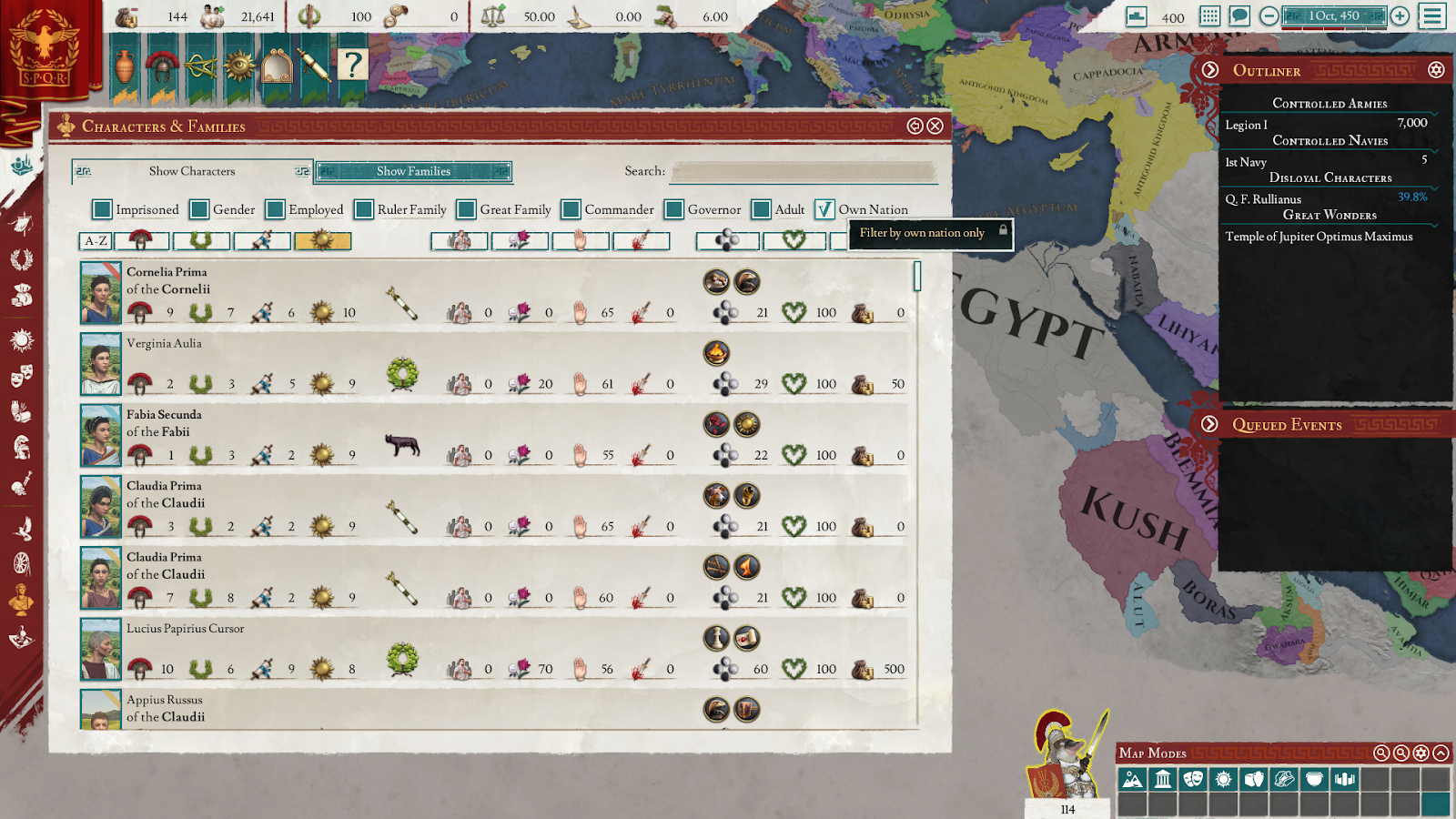 Of course, this is not possible everywhere; the distinction between windows you’re likely to need while using the map, and otherwise, has been accentuated. You may also notice a few additional tidbits here 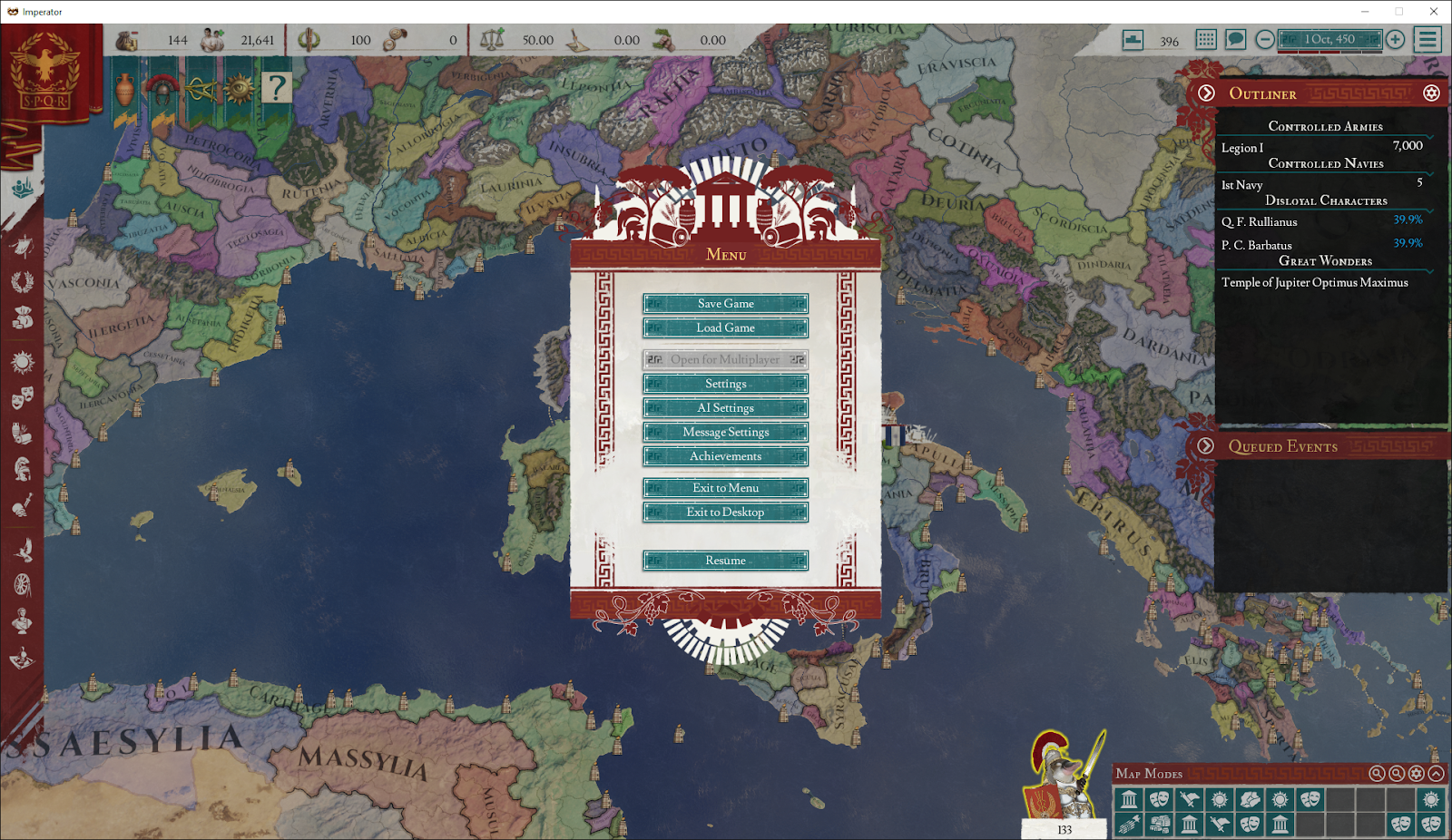 Even the in-game menu has received some attention. 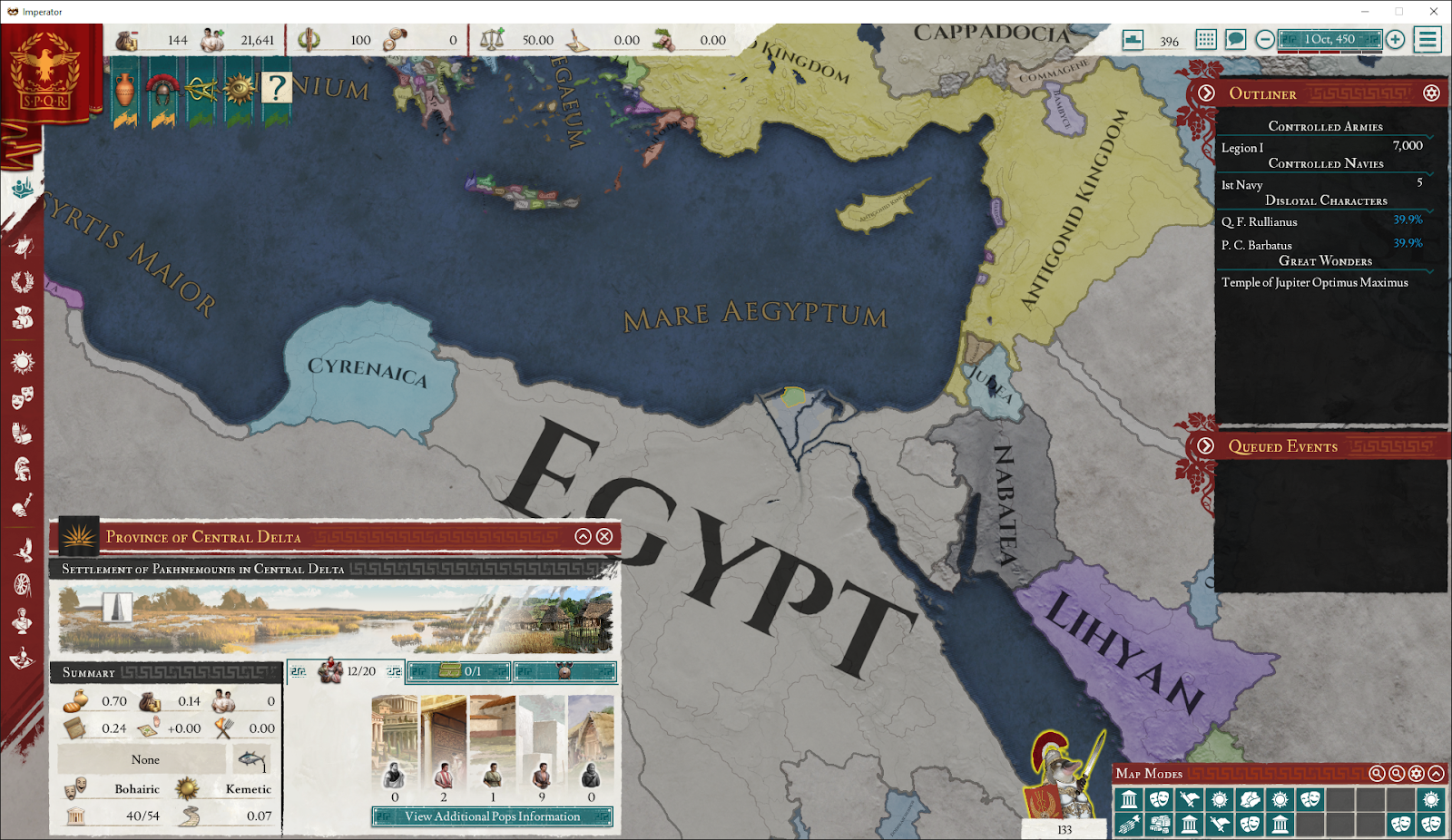 Widely regarded as one of our most confusing windows, we’ve done a lot of work on the Territory window to add some breathing room to information. 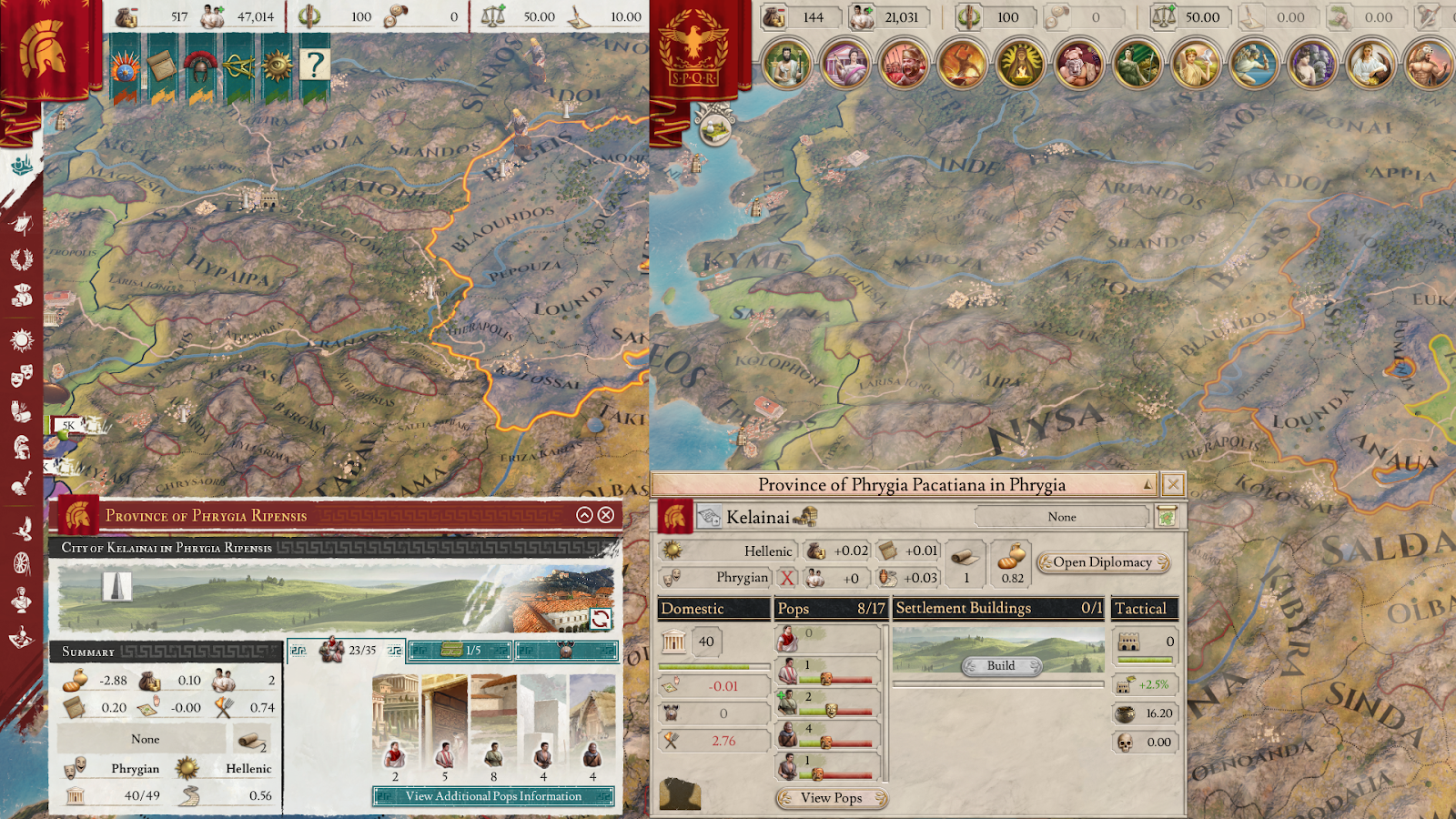 There is, of course, much more to show here. Next week @jiroro will take a long dive into the reasoning and specifics behind the UI rework.

As always, I look forward to hearing your comments.